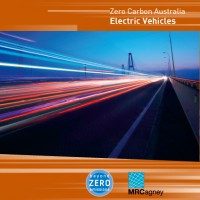 A new report states a shift in Australia over a 10 year period to electric vehicles powered by 100% renewable energy would eliminate at least 6 per cent of the nation’s greenhouse gas emissions.

Released on Friday, Beyond Zero Emissions’ Zero Carbon Australia Electric Vehicles report says such a shift is not only realistic, but also affordable and quantifies the costs of replacing all cars in Australia with EVs within 10 years.

The reports says typical urban Australians drive around 35km a day, with almost half of trips taken being less than 5km. More than 99 per cent of trips are less than 120km, within the range of a relatively modest electric vehicle.

While the analysis envisions most scenarios involving Australians charging their vehicles at home, the modelling used incorporates publish charging infrastructure throughout all of Australia’s urban areas capable of charging up to 80% of an EV battery in 30 minutes.

Applying conservative assumptions, the report states it would cost approximately 25 per cent more than a business-as-usual scenario to transition to 100 per cent electric cars by 2025, equating to $20 more per capita, per week.

“The costs of shifting to 100 per cent electric vehicles would be even lower if complementary policies are adopted to allow more Australians to conveniently walk, cycle, and use public transport, with simultaneous support for car-share and ride-share programs that provide the convenience of access to a car, while avoiding the costs of individual car ownership,” states the executive summary.

The report states given the rapid decrease in costs associated with solar power, there are additional opportunities for charging EV’s directly from rooftop solar panels.

“If managed carefully, co-locating generation (PV) with electric cars can limit negative cost impacts of either technology on the distribution grid.

The report (PDF) was launched in Brisbane at the University of Queensland’s St Lucia campus.

Minister for Energy Mark Bailey welcomed the report and said the Palaszczuk Government is committed to seeing EV’s being a common sight in Queensland. It recently awarded Brisbane’s Tritium $2.5 million to support development of their fast charging technology.

“I am proud that Queensland is a world leader in residential solar. It’s now our second largest power generator with over 400,000 solar rooftops, and over 1,500 megawatts of installed capacity,” said Minister Bailey.

“EVs can provide an energy storage solution for these homes and help us turn the Sunshine State into the Solar State”.