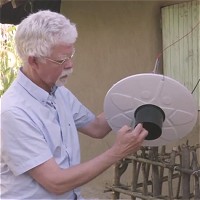 A 3-year trial of a solar powered mosquito trap on an island in Kenya has resulted in a 70% reduction in a malaria-carrying mosquito population. The trial also saw a 30% decrease in incidence of the crippling and sometimes fatal disease in households using the device.

According to the World Health Organisation,  nearly half of the world’s population are at risk of malaria. Last year, approximately 214 million malaria cases were recorded and an estimated 438, 000 deaths occurred due to the disease.

The old saying goes, “build a better mousetrap and the world will beat a path to your door” – and it could be applied to mosquito traps as well.

Back in 2013, we reported Netherland’s Wageningen University had embarked on a project to install more than 4,000 solar powered mosquito traps on the Kenyan island of Rusinga. That trial, led by Professor Willem Takken, is now complete and the results are very encouraging.

The “natural attractant” used for the SolarMal trap turned out to be human body odour.

The device used is simple, but very effective. Air is drawn up through the middle section of the trap by a fan and forced out along with the scent through tiny holes in the base of the outer casing. When mosquitos investigate the scent, they are sucked in by the fan and then die through dehydration – we guess a few might get clobbered by the fans on their short journey as well.

Power for the device is via a single small solar panel installed on the rooftop of the house where the outside trap is set. The panel charges a battery to enable it to operate at night. Households involved with the trial also benefited from the micro solar power systems by being able to charge small devices and power LED lights within their homes.

The counterflow mechanism used by the trap has previously demonstrated to be very effective in trapping anopheline mosquitoes. In another similar traps, we believe carbon dioxide was used an attractant. If you’re a mozzie magnet, the level of CO2 you exhale may have something to do with you being particularly appealing to the loathsome critters.

Here’s a video explaining a bit more about the trial and the trap – and yes, we noticed at around the 1 minute, 45 second point the gentleman using a hammer to install the solar panel. It made us cringe a little and we wouldn’t recommend it; but it looks like his interesting choice of tools got the job done!

In addition to dealing with malaria mosquitoes (Anopheles gambiae s.s), the trap may also work on mozzies known to carry dengue fever and Zika virus.

A paper on the Wageningen University trial has been published in the journal The Lancet.

Another trap we’ve reported on in the past is a much more high-tech device that uses lasers to zap mosquitoes. As impressive as that device is, perhaps sometimes the simple things are indeed the best?