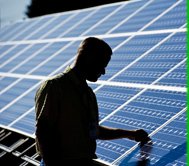 One of the challenges for power companies in effectively utilising solar energy on a large scale is the ability to predict and prepare for fluctuations in electricity generation due to changes in weather – cold, heat, airborne dust and especially clouds can have a major effect.

On small installations such as a grid connected home solar power system, the effect of clouds is unnoticeable as the system automatically switches to drawing power from the mains grid if the amount of electricity being generated isn’t sufficient. When it comes to utility scale generation and solar panels are spread over a large area and cloud can cast a shadow onto one part of a solar farm, but leave another in full sun; the effects are not well understood.

"Our goal is to get to the point where we can predict what’s going to happen at larger scale plants as they go toward hundreds of megawatts," says Sandia researcher Scott Kuszmaul.

Sandia’s system observes cloud shape, size and movement and is currently being tested at the 1.2-megawatt La Ola Solar Farm on the Hawaiian island of Lana’i. La Ola provides up to 30 percent of the island’s peak electric demand, which is one of the highest rates of solar PV power penetration in the world.

As researchers were not able to interrupt operations of the plant,  Sandia’s engineers have connected 24 small sensors to the farm’s Sunpower solar panels and use a radio frequency network to transmit data. The sensors take readings at one-second intervals.

For very small installations, there is already portable and economical equipment for carrying out site surveys such as the Power Predictor, but Sandia researcher Josh Stein says Sandia’s technique will allow a developer to place a sensor network at the proposed site of a major solar farm, take measurements and use that to predict plant output variability.

Sandia National Laboratories is a government-owned/contractor operated (GOCO) facility and has been developing science-based technologies since 1949.