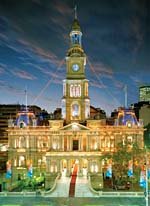 The $40 million internal restoration of Sydney’ Town Hall, the largest overhaul of the building since the 1930’s, has won a prestigious National Trust Heritage Award.

According to  Lord Mayor Clover Moore MP, "Cutting edge technology and sustainable materials of the highest quality were seamlessly integrated in the building allowing us to bring Sydney Town Hall into the modern era while retaining its historic charm."

The building was closed for nearly 2 years while the major project was under way. At one point,  the nineteenth century structure needed to be supported while excavating a major basement to house essential plant machinery and the City Council’s art and artefact collection.

The Sydney Town Hall includes a Grand Organ that was the largest in the southern hemisphere when installed in 1890 and described as the "finest organ ever built by an English organ builder". A major cleaning program to clear accumulated dust from nearly 9,000 pipes is being undertaken.

Restoration also included renovation in the form of the addition of solar power. 240 Suntech solar panels were installed on the rooftop with a total capacity of 48 kilowatts, the equivalent of around 30 average home solar power systems. The rooftop array is the largest solar panel installation in Sydney’s CBD.

A more energy efficient lighting system along with 1700 low electricity consumption lights was also installed, along with a climate control system that will consume 30% less power. New storm water infrastructure throughout the building will help reduce water use by between 15 to 20 per cent.

The National Trust Heritage Awards promotes and recognises excellence within the field of heritage conservation. The Awards showcase projects the further the conservation of Australia’s environmental, built or cultural heritage.