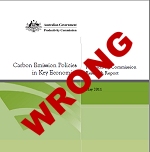 Mr. Rich expressed frustration at the continued demonising of small scale solar based on misinformation and grossly inaccurate calculations; citing examples showing the cost of carbon abatement to be a fraction of the Productivity Commission’s figures.

Ged McCarthy, President of the SEIA, weighed in on the subject yesterday, stating, “The Productivity Commission understates the emissions abatement from solar power by using first-grade mathematics which assumes every solar power system in Australia is 1.5kW in size”.  Mr McCarthy said the Commission then inaccurately guesstimated 50% of generated solar power attracts a feed-in tariff, whereas a 1.5kW system typically only receives a premium on 17%-28% of their generation.

John Grimes, CEO of AuSES, also blasted the report. “The solar costs used by Productivity Commission are nearly twice what they currently stand at, and are still falling rapidly. These costs are then compared to the wholesale electricity price, ignoring the electricity transportation losses that are avoided with distributed power.”

AuSES and SEIA referenced a detailed analysis of the Commission’s study; performed by the Australian PV Association (APVA), which found the Commission to “have chosen an inappropriate methodology and applied some questionable assumptions”.

“The benefit of roof-top solar will again be realised during next summer when air-conditioner use creates peak demand. Solar users will help prevent blackouts and energy cost spikes but they must be paid for what they provide. Tony Windsor, Rob Oakeshott and The Greens understand this, now we need leadership from Prime Minister Gillard,” said Mr Grimes.

The AuSES/SEIA-organised National Industry Led Solar Summit will be held at Parliament House in Sydney today to discuss the report and a slew of other issues affecting the solar industry – and in turn, Australia’s clean energy future. A summary of outcomes from the Summit will be presented at the upcoming NSW Solar Summit 2 as a formal response from the solar industry.