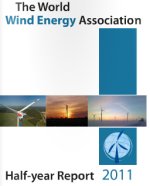 After a somewhat listless year in 2010, the global wind power industry has gained momentum during the first half of 2011.

According to the World Wind Energy Association’s (WWEA) half-year report, 18.4 GW of new wind turbine installations occurred during the first half of 2011, with 43.9GW expected by the end of this year.

China, USA, Germany, Spain and India combined account for 74% of global wind capacity; with China having an overall installed capacity of around 52 GW by the end of June this year. China added 8 GW in the first 6 months of 2011, a record according to WWEA.

The US market has had a particularly strong year so far, adding 2.252 gigawatts of wind power capacity between January and June, 90% more than the same period last year.

Canada added 603 MW during the first half of 2011, with the province of Ontario the leading region due to favourable government policies.

The number of countries now using wind power has grown from 83 to 86, with Venezuela, Honduras, and Ethiopia the latest nations to be harvesting wind energy.

By the end of June, global wind capacity had reached 215 GW, representing growth of 22.9%. WWEA estimates total installed wind capacity by the end of 2011 is to reach 240.5GW, enough to provide for almost 3 % of the electricity demand all over the world.

“Although the deployment of the wind power worldwide is again speeding up, we still see relatively moderate growth rates, compared with previous years,” said Stefan Gsänger, WWEA Secretary General. “On the one hand, it is very encouraging that new countries are coming up. On the other hand, we need more support on the national as well as on the international level.”

Mr. Gsänger expects Japan to play a major role in wind power in the foreseeable future and may join the group of leading wind power generating countries.