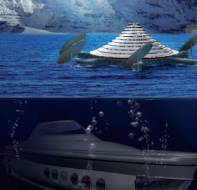 The old jokes state “useful as deckchairs on a submarine” or “flyscreens on a submarine”, but a solar powered submarine is not a joke or science fiction – it will be a reality soon.

Under Project Goldfish, Swiss company BKW FMB Energie is developing a solar powered submarine that will be powered by a floating solar array, saving power on continual trips to shore for recharging.

The floating platform, reminiscent of a water-lily design, is made up of a central covered hub that can act as a conference/debriefing or supply center, surrounded by 5 pontoons that are fitted with solar panels. The solar array will cover an area of 300 square meters in total and generate 30 kilowatts of electricity.

The energy generated by the platform will be used to maintain the position of the platform via GPS, some of the electricity will power applications on the Lake Thun’s shore and the rest used to recharge the deep cycle batteries of the submarine.

The 30 meter long, 10 meter high submarine, adapted from an already commercially available battery powered model, will weigh up to 80 tonnes, have a maximum diving depth of 300 meters, stay submerged for over 30 minutes and be able to carry 24 people. It will give researchers a better glimpse at the world below the surface of Lake Thun in the Swiss Alps.

BMK sees much wider applications for its floating mobile solar power design, including using a similar concept to power the Sydney Opera House in Australia, which is located right on the waterfront of Sydney Harbour.