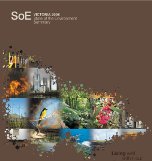 Victoria’s first comprehensive State of Environment Report was recently released with unsettling statistics on energy consumption in the state, particularly in relation to coal fired electricity generation and the lack of solar power uptake.

The report states that current patterns of resource use in Victoria are unsustainable and the Victorian ecological footprint is triple that of the world average, with energy generation and consumption having the biggest impact.

Some of the statistics in the report include:

Author of the report, Victoria’s Commissioner for Environmental Sustainability headed by Dr Ian McPhail, has recommended The Victorian Government conduct a study to identify and overcome barriers to the development of a network of distributed renewable energy and gas-fired electricity generators in order to delay the need for more brown coal electricity generation.

Download the full report – State of the Environment Victoria 2008 (PDF)