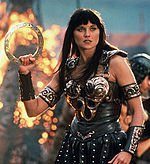 Updated February 28:  Lucy Lawless and five other Greenpeace activists hunkered down at the top of a derrick on a Shell drilling ship berthed in the port of Taranaki in New Zealand were arrested by police yesterday. All six activists have been released from police custody and will appear in court on Thursday. It’s understood they were charged with burglary.

Posting to GreenPeace’s blog and after her release, Ms. Lawless stated: "Fossil fuels will darken our future. Only renewable energy will enhance it. We owe it to our kids to fight for clean energy!"

According to Bunny McDiarmid, Executive director of Greenpeace New Zealand, the team did not steal anything.

The action by the group has so far resulted in over 133,000 emails sent to Shell executives to protest the company’s activities in the Arctic.

Actress Lucy Lawless, who played the lead character in Xena: Warrior Princess, and other Greenpeace protesters are stopping an Arctic-bound Shell drill ship from leaving the Port of Taranaki in New Zealand.

The activists have climbed the rig’s drill derrick and are staying put. With enough provisions to last for days, the group are communicating via mobile phone and a solar powered laptop.

Greenpeace says Shell’s forays into the Arctic could mark the commencement of an Arctic oil rush "that could cause irreparable harm to this fragile frozen world and its inhabitants." 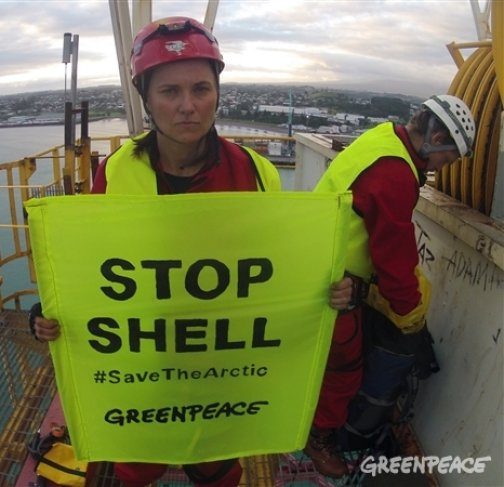 Drawing on the example of the Deepwater Horizon disaster where 6,000 vessels were only able to recover 17% of the oil that leaked into the Gulf of Mexico; Greenpeace says a major oil spill in the Arctic would be an environmental disaster and almost impossible to clean up.

The action forms a focus point for a Greenpeace campaign to encourage people to send a message to Shell executives demanding it stays out of the Arctic. Ms. Lawless and others are posting updates and photos to a live feed on the Greenpeace NZ home page.

In her latest update, Ms. Lawless stated in the first 24 hours of the campaign, almost 90,000 people emailed Shell, "and we’re still counting".

In an earlier update, Ms. Lawless commented: "We have the technology and the know-how for a clean and viable future.  Inevitably, we must more (sic) to a clean energy economy."

According to a report on ABC News, Ms. Lawless is not concerned with the prospect of arrest over the action she has taken.

"We need to start switching over to renewable energy now; we don’t have to go to the ends of the earth to suck out every last drop of oil."

New Zealand born Lawless has been actively involved with Greenpeace for some years and became a Greenpeace ambassador in 2009.