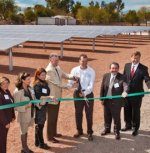 Representatives from juwi solar Inc. (JSI), owner and builder of the solar garden, were on hand when Mars executives and representatives from NV Energy flipped the switch at the Las Vegas plant. In 2009, JSI built a larger 2.2 MW capacity/28,000 solar panel installation at Mars’ Hackettstown, New Jersey factory.

"This is the second solar PV project built by juwi solar on Mars-owned property," said Michael Martin, CEO of JSI. "We are proud to play a role in advancing environmental and sustainability goals by replacing the grid’s brown power with green power generated onsite."

The new Ethel M factory solar garden features 2,112 ground-mounted solar panels on 4.4 acres, and is the largest solar installation by a food manufacturer in Nevada.

The installation will generate 1,258 megawatt hours of zero-emission electricity each year, offsetting 867 metric tons of greenhouse gas – the equivalent of removing approximately 170 vehicles from the road. The project will generate as much energy as 115 Nevada households use annually.

Mars has a stated goal of playing a role in the battle against climate change and plans to build more solar gardens at factory sites across the USA. The company has committed to a 100 percent renewable energy target and becoming emissions free by 2040.

The Ethel M Chocolate brand is unique to Las Vegas, providing specialty chocolates to customers mainly by phone or the internet. The Ethel M specialty line was created by Mars empire founder Forrest E. Mars Sr., who named the company after his late mother.

The factory itself features a desert botanical garden and attracts over 700,000 visitors each year. A viewing area is planned so tourists can overlook both the botanical and incorporated solar gardens.