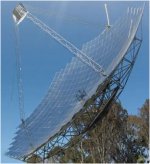 A $230 million solar power project situated at Whyalla in South Australia has moved closer to completion after the signing of a funding deed between the consortium developing it and the Commonwealth government.

According to Whyalla News, the sign off for $60 million sourced through the Renewable Energy Development Program (REDP) occurred after lengthy negotiation between the parties, but the project could still be completed on schedule.

At 500m2, ‘Big Dish’ technology is the world’s largest paraboloidal dish solar concentrator according to Wizard Power. It focuses sunlight to concentrations in excess of 2000 times, generating heat at temperatures of over 1,500 degrees Celsius.

Each dish consists of 380 individually curved mirror panels and depending on the application; the receiver may be in the form of boiler, a chemical reactor, a turbine, or any other suitable energy conversion device.

The dish and base frame sits on top of wheels around a circular ring beam foundation for azimuth tracking and the dish is elevated using a rack and pinion system for altitude tracking.

The 40MWe solar farm is designed to be a peaking power plant that will generate electricity when it is most in demand. SolarOasis will be the first commercial scale concentrating solar thermal plant to export power to the Australian electricity market.

The solar thermal concentrators are to be manufactured and assembled on-site and the project is expected to directly generate over 200 jobs in Whyalla during the two year manufacturing and construction period, with additional opportunities for the ongoing operation and maintenance of the plant after completion.