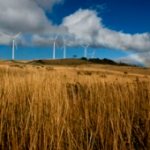 3 new wind farms have been grid-connected in Romania; which will add an extra 206MW of wind capacity hosted in the country.

According to the developer, Enel Green Power, the three facilities will generate around 560 million kWh annually once fully operational.

The Elcomex EOL wind farm consists of fifty-two wind turbines of 2.3 MW each. Twenty-six 2.3 MW wind turbines make up the Targuso wind facility and the Gebelesis project in northern Dobrogea is comprised of five 3MW and six 2MW turbines.

Enel Green Power says it has reached a total installed wind capacity in Romania of around 500 MW. Globally, the company now has an installed renewables capacity of over 7,800 MW represented in over 700 solar, wind, hydro, geothermal and biomass plants in 16 countries. Enel Green Power states that during 2011, its various facilities collectively generated 22.5 billion kWh – enough to meet the electricity needs of more than 8 million households.

Romania has embraced wind power and according to Renewable Energy World, capacity grew rapidly from 12MW in 2009 to 1,440MW in September 2012; with a further 600MW currently under construction at that point in time.

Romania’s uptake of solar power has been slow, even though the country enjoys 210 sunny days per year and offers solar resources of between 1,000 kWh/ m2/year and 1,300 kWh/ m2/year.

While only reportedly having around 5MW of installed large scale solar capacity currently, it has a number of utility scale projects in the pipeline; including the Covaci Solar Park, which will consist of 480,000 solar panels. Other projects include a solar farm in Timiş County,  Gura Ialomiţei Solar Park (10MW), Satu Mare Solar Park (5 to 8 megawatts), Sfântu Gheorghe Solar Park (2.4 megawatts), a project in Gătaia (32MW) and a 48 MW solar park in Segarcea.