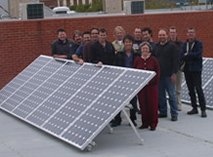 Solar power and going green is most definitely in – it’s hip, it’s happening – even in the armed forces.

While armies around the world are still tinkering with “green” bullets and off grid solar power systems to deliver electricity to troops out on the battlefield, an Australian company with no previous history in military hardware development has combined those two concepts in what they term a GWMD (Green Weapon Of Mass Destruction) – a solar powered death ray.

The company is Victoria based Energy Matters – a national provider of off grid and grid connect solar power systems for home and commercial use.

So what is a firm with its roots sunk deeply in providing renewable energy solutions for peaceful purposes doing developing cutting edge weaponry such as a solar powered death ray? As with many revolutionary inventions, it happened by accident. Energy Matters’ Yerjem Chir explains:

“I was walking past the staff room a few months back and heard laughter along with a strange humming sound. This was followed by the smell of something burning. A few of our folks had hooked up a small polycrystalline solar panel to an odd looking device they had made partly from solar regulator, power inverter and stapler components. This device was emitting a ray and the team were using it to defrost frozen dim sims in seconds – faster than any microwave I have ever seen.”

“The team’s invention got me thinking – what would happen if we hooked up 10 big monocrystalline solar panels to this gizmo. We set up the trial and flicked the switch. Lo and behold, our contraption silently vapourised the delicatessen across the road in the blink of an eye; like totally. There was nothing left but a small pile of ash and a solitary badly singed yiros wrapper!”

Luckily for the company, this misadventure occurred in the early hours of the morning when the store was closed. After getting over the initial shock, the owners of the deli marvelled at the invention and saw its potential for not only the fast food industry but national security – a solar powered death ray.

Energy Matters immediately entered into a confidentiality agreement with the delicatessen owners and the parties continued developing the technology, albeit in more tightly controlled conditions. “The input of our friends at the deli has been invaluable and it’s been wonderful having a fully catered R&D program!” states Mr. Chir.

Gone too are the issues with disposing of nuclear waste and the ethical dilemma of the effects of pesky nuclear fallout that can haunt communities for generations. The intensity of the solar powered death ray reduces buildings and organic materials to a fine non-toxic ash, but leaves no other trace.

Forget bulky, fossil fuel gobbling missile transportation systems or heavily guarded missile silos that mar the landscape; the solar powered death ray components can be transported on the back of your average flat bed truck or ute. Satellite reflectors will allow targeting of any place on planet Earth from any point.

The solar powered death ray is not dependent on good weather either. If it’s cloudy, deep cycle battery storage can be drawn on to power the ray; meaning that battle does not need to be confined to sunny days. Advanced quick recharging 12 volt deep cycle battery technology along with the cutting edge proprietary laser device allows the system to use as little as 5 watts per burst when set to “stun/blind/defrost” mode.

According to Energy Matters, the EM GWMD II solar powered death ray can be used a revenue generating tool as well as a powerful deterrent.

When the batteries are fully charged, any surplus energy generated by the solar panels can be exported to the mains grid, much like a home grid connect solar power system. Given this special feature, the weapon can pay for itself within just a few years through feed in tariff programs – except for in places like Victoria, where a credit will be applied to the owner’s electricity bill and must be used within 12 months.

The soon to be released commercial solar powered death ray model will also have full automation features using a modified HAL artificial intelligence system. The company says this will allow a “set and forget” mode.

“We’ve tried to make the death ray as user friendly as possible – even a child could operate it. By removing humans as much as possible from the process through incorporating HAL, it will ensure error free operation. Enter a few co-ordinates which are then checked against Google Earth, click the “OK” button on the “Are you sure you want to obliterate (town/city/state/country)?” window, then let it rip – walk away, have a latte or attend to other core activities while the EM GWMD II solar powered death ray methodically and rapidly strafes an area.”, says Mr. Chir.

The project is still mostly top secret, so no images of the death ray are currently available. Energy Matters says negotiations are under way with various governments around the world including Australia, the USA, Russia, Venezuela and North Korea. With a target price of just $9,995.99 per unit including GST and before any government rebates, the device will certainly be within the grasp of all countries, perhaps even Zimbabwe. The device may also be eligible for Renewable Energy Certificates (RECs).

Mr. Chir believes that all governments and militia groups should have access to the EM GWMD II solar powered death ray in order to create a level playing field and to ensure that any global conflict is done so in an environmentally friendly way. In a post homo sapiens world created courtesy of the EM GWMD II, Energy Matters envisions cute bunny rabbits, bilbies, polar bears, pandas and whales will thrive with no risk of mutation.

“If we’re going to be hell-bent on destroying each other, the least we can do is to ensure the associated carbon footprint and collateral environmental damage is low – and the EM GWMD II solar powered death ray can help us achieve this noble goal. This is truly Armageddon evolved, all thanks to solar power.”