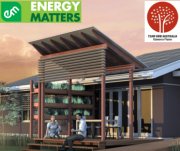 Team UOW Australia has been announced as the overall winner of the Solar Decathlon China 2013 finals.

The Solar Decathlon challenges collegiate teams to design, build, and operate solar-powered houses that are cost-effective, energy-efficient and attractive.

Beating 19 other entries from around the world, the University of Wollongong and TAFE Illawarra team received multiple instances of recognition for their Illawarra Flame House at the first Solar Decathlon China finals:

The Illawarra Flame entry was unique in that while other teams chose to build new homes,  Team UOW decided to demonstrate the retrofit of a typical Australian ‘fibro’ house; turning it into a sustainable, net zero-energy home.

Team UOW’s goal was “to inspire the Australian community to embrace sustainable retrofitting technology, and to remove existing social and financial barriers to the implementation of these solutions.”

The team had to assemble and disassemble the house twice in Australia, ship it to China and rebuild it in less than two weeks.

Their efforts were supported by sponsorships from multiple companies; including national solar provider Energy Matters, which was a significant sponsor.

Solar Decathlon China 2013 was co-hosted by the US Department of Energy and the National Energy Administration China.