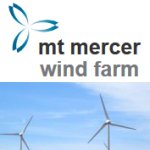 On Tuesday, the first electricity was generated at the Mt Mercer Wind Farm near Ballarat in Victoria.

The 64-turbine wind farm is being constructed by New Zealand’s Meridian Energy. Mt Mercer will have a capacity of 131 MW, bringing the company’s total operating portfolio in Australia to 201 MW.

Mt Mercer, which will generate enough electricity for 74,000 average Australian homes (and enough to power the entire city of Ballarat), is the third wind farm project that Meridian has been involved with in Australia.

The company was also involved with the 420 MW Macarthur Wind Farm in Western Victoria; but sold its stake earlier this year.

The Mt Mercer facility is using REpower MM92 2.05 megawatt turbines. Employing up to 200 people during construction, the wind farm will provide up to 20 permanent jobs in the Ballarat region once completed.

“Through innovative contractual arrangements and close co-operation with our partners, we have demonstrated that new renewable energy projects can be successfully delivered,” says Meridian CEO Mark Binns.

Perhaps as a subtle hint to a government that appears to be casting a scornful eye on Australia’s Renewable Energy Target (RET), he added:

“In particular, the Federal Government’s RET Scheme has provided a strong financial incentive to invest in wind farms in Australia.”

Meridian is New Zealand’s largest electricity generator, operating seven hydro stations and four wind farms in the country. It has an NZ wind power capacity portfolio of 356 megawatts; enough to supply 179,000 average New Zealand households and its hydro stations have a combined installed capacity of 2388 megawatts.