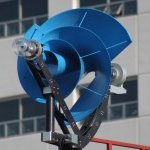 A new design of wind turbine that its makers claim has practically no resistance and is whisper quiet, the Liam F1 borrows from nature.

Created by Netherlands company, the Archimedes, the  Liam F1 was officially launched today at the RDM Campus in Rotterdam.

Drawing on the form of the Nautilus shell and the mathematics of ancient Greek mathematician, physicist, engineer, inventor and astronomer Archimedes, the company says the turbine will generate on average 1180 to 1500 kWh of electricity annually at an average wind-speed of 5m/s (18 kilometres per hour). It has a cut-in wind speed of 2m/s (7.2 kilometres per hour).

The Archimedes’ team appears supremely confident in their creation; which they say is the result of ten years of research and development.

“This compact wind turbine, with a diameter of only five feet, will cause a revolution in the world of generating electrical power and resistance theories,” states the company.

“An additional environmental advantage to the customer: the Liam F1 is virtually silent, easily fits on the roof of a house just as solar panels but does not have the disadvantages of conventional wind turbines.”

A press release from the company states because of its screw-design, the Liam will automatically position itself optimally, “just like a pennant” and will therefore produce maximum energy yield.

The Archimedes says it has already sold 7,000 turbines in 14 countries prior to the official launch and is now developing smaller units that can be used in applications such as boating.