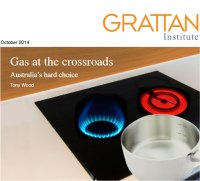 Rising gas prices will not only hit households and businesses, it will also likely price gas-fired power generation out of the electricity market says the Grattan Institute.

In recent years, lobbyists for the gas industry have screamed for more access to avoid a domestic supply “crisis”. It has become increasingly clear there was really no crisis – it was all about being able to supply the lucrative export market.

According to a recent report from the Grattan Institute, the average household gas bill in Melbourne will jump by more than $300 a year, and in Sydney and Adelaide by more than $100 a year. This is on top of Australian households enduring electricity and gas price rises of 61 and 36 per cent respectively in real terms over the past five years.

Gas prices will put also put severe pressure on businesses large and small. According to a related ABC news item, Grattan Institute energy program director Tony Wood says a small business such as a dry-cleaner or bakery that uses gas could be up for a bill increase of between $2,500 and $3,000.

The Institute’s report also states the increases will price gas-fired power generation out of the electricity market, except to address short-term peaks in demand.

There have been calls for to protect Australian industry and consumers from the price rises – something the Institute strongly discourages; stating “in the long run, protection harms everyone.”

However the gas situation plays out; energy certainly isn’t getting any cheaper – unless households and businesses create it on-site using solar power. National solar provider Energy Matters says a 4.5kW solar panel system can provide energy bill savings of between $900 and $2,200 a year.

Gas At The Crossroads: Australia’s Hard Choice can be viewed here (PDF).