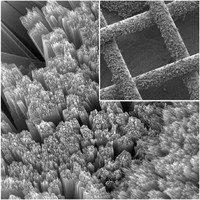 A solar battery that creates charge by “breathing” oxygen could lower the cost of solar energy by 25 per cent, according to Ohio State University scientists.

In a world first, the designers combined a unique porous solar panel with a battery system to form a single hybrid device – one capable of converting almost 100 per cent of sunlight to energy and storing it for extended periods.

The device is set to be licensed for industry use where it is hoped to significantly reduce the cost of storing solar power, an important factor in the uptake of solar worldwide.

“The state of the art is to use a solar panel to capture the light, and then use a cheap battery to store the energy,” said Yiying Wu, professor of chemistry and biochemistry at Ohio State. “We’ve integrated both functions into one device. Any time you can do that, you reduce cost.”

The design builds on previous work of Ohio State’s KAir Energy Systems, which in April won a $100,000 Department of Energy clean energy prize for their highly efficient battery system that discharges current by chemically reacting potassium and oxygen.

“Basically, it’s a breathing battery,” Wu said. “It breathes in air when it discharges, and breathes out when it charges.”

The KAir battery offers a staggering 98 per cent efficiency rate and is claimed to be far cheaper to produce than rival systems. Wu’s team decided to use it to springboard to a fully integrated solar battery.

To facilitate the flow of oxygen to the battery, the team designed a mesh solar panel made from light-absorbing titanium gauze. While air passes freely through the mesh, fronds of titanium dioxide rods capture sunlight.

When the device charges, light particles passing though the mesh are turned into electrons that go on to trigger a complex chemical process inside the battery. An electrode of lithium plate decomposes releasing both oxygen, which is expelled into the air, and lithium ions, which are stored as lithium metal.

When power is drained from the battery, it chemically “inhales” oxygen from the air to re-form the lithium needed to begin the process over again.

The University said the solar battery’s lifetime is already comparable to rechargeable batteries currently on the market and the DoE has committed to fund Wu’s team on how enhance performance using new materials.