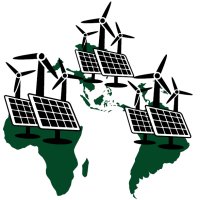 The wealth of the 782 richest people on the planet could power Africa, Latin America and most of Asia with 100% renewable energy by 2030 says a recent report.

Friends of the Earth International’s ‘An Energy Revolution Is Possible’ states USD $5,148 billion of extra investment would be needed to generate half the world’s electricity with 100% renewables by that year.

The 782 wealthiest individuals on the planet hold personal fortunes of around $5.15 trillion. It would only take the wealth of the richest 32 people to power Latin America.

The comparisons used by the organisation with individual wealth are just an indicator that finance for this sort of effort is certainly available – it’s not a policy position of the group as such.

The group’s vision sees energy infrastructure, including supply and distribution, being decentralised as much as possible.

“Decentralisation will help ensure energy access for people in remote and rural areas; will facilitate subsidiarity and community or local ownership and control; and will reduce energy wastage in distribution because energy and heat will be produced close to the point of use,” says the report.

Among the steps to kick-start such an effort would be the ending of current fossil fuel subsidies and redirecting funding to community and socially controlled renewable energy.

“This report is a wake-up call to policy makers, NGOs and governments alike,” says the group. “Our findings demonstrate the urgent need to address inequality in order to create a climate safe future, while establishing that a 100% renewable energy revolution is financially well within reach.”

On a very much related topic – Bill Gates, one of those on the rich list used by Friends Of The Earth, is apparently announcing the creation of a multibillion-dollar clean energy fund later today that will include contributions from other billionaires and philanthropies. While it will reportedly support renewables, it’s also rumoured the new fund would also help finance new nuclear energy technologies.

Earlier this year, Mr. Gates pledged to spend $1 billion of his own cash on researching and deploying clean energy technology. Some of his investments include companies involved with next generation battery storage, other storage methods and advances in solar power technology.