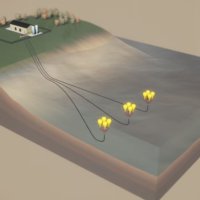 The world’s first underwater compressed air energy storage system is up and running and is claimed to be one of the cheapest forms of energy storage available.

Located in Toronto Island, Canada; the system’s underwater air storage component is located 2.5km off the shore of Lake Ontario – one of the five Great Lakes of North America.

An air compressor converts the electrical energy into compressed air pressurized to the same level found at depth where the accumulators (balloons or solid containers) are located; which can be 50-500 meters below the surface of a body of water. The compression process also creates heat, which is captured for use during the generation phase.

The air is then piped to the accumulators where it is held. When electricity is required, the system reverses the air flow; using hydrostatic pressure to force the air back to surface.

The stored heat is added back to the air which is then routed to an expander that drives a generator to create electricity.

Hydrostor says the system has a roundtrip AC/AC efficiency from 60% to 80% or higher and a project such as the one in Toronto Island needs less than 2 years project lead time. The expected lifespan of the system is 30+ years without efficiency loss.

Hydrostor says its system is now commercially available, available in configurations from 5MW/ 30MWh up to more than 100MW/ 1,000MWh.

Hydrostor states among the advantages of this form of energy storage are capital costs are less than half of competing li-ion battery technology with over twice the cycle life.

The company says it has a smaller footprint, greater siting flexibility and a lesser environmental impact than pumped hydro.

Tom Rand of Managing Partner of ArcTern Ventures, an early backer of Hydrostor, believes the company has found the holy grail of large scale energy storage; which will enable increasing levels of renewables such as wind and solar power into the electricity generation mix.