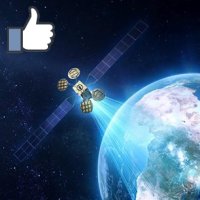 Facebook has announced a partnership with Eutelsat to provide coverage to communities without internet access via a solar powered satellite.

“As part of our collaboration with Eutelsat, a new satellite called AMOS-6 is going to provide internet coverage to large parts of Sub-Saharan Africa,” said Facebook co-founder and CEO, Mark Zuckerberg.

AMOS-6 is a 5-ton earth communications satellite to replace the ageing Amos-2 satellite; which is planned to be retired next year.

AMOS-6 will be powered by more than 10kW capacity of solar panels populated with Emcore’s ZTJ triple-junction solar cells; which have a conversion efficiency of around 30%.

” The AMOS-6 satellite is under construction now and will launch in 2016 into a geostationary orbit that will cover large parts of West, East and Southern Africa,” said Mr. Zuckerberg.

” We’re going to work with local partners across these regions to help communities begin accessing internet services provided through satellite … We’re going to keep working to connect the entire world — even if that means looking beyond our planet.”

Facebook has been exploring various methods of beaming internet access down into underserved and remote communities around the world. In August this year, the company unveiled the prototype of a massive solar powered drone named Aquila that has the wingspan of a Boeing 737, but weighs less than a car.

Facebook’s connectivity efforts are part of the Internet.org project, an initiative bringing together technology leaders, nonprofits and local communities to connect the two thirds of the world without internet access.

Internet.org has already seen the launch of Free Basics by Facebook, which provides free basic services in parts of Africa, Latin America and Asia. More than one billion people now have access to the Free Basics service; which will continue to expand to more countries around the world. Last month, Facebook announced more than 60 new services are available across the 19 countries where free basic services are present.

Other participants in Internet.org include Ericsson, Mediatek, Opera, Samsung, Nokia and Qualcomm.