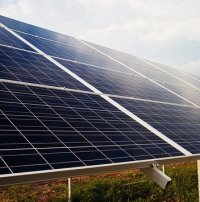 2014 is the first year renewable energy has been the major source in Germany’s electricity generation mix.

According to preliminary surveys by the German Association of Energy and Water (BDEW), renewable energy based electricity generation reached 25.8 percent this year; up from 24.1 percent last year. Renewables provided 27.3 percent of gross domestic electricity consumption in 2014.

2014 saw all sorts of new renewable energy related records set in Germany. Most recently, wind power achieved a new record of 29.7 GW peak power production on December 12. According to the Fraunhofer Institute, wind based electricity production on that day was 562 GWh.

On a day in April this year, renewables made up nearly 3/4 of peak domestic German power demand.

By the end of October this year, Germany had 35.062 GW of onshore wind capacity and 616 MW offshore. Installed solar power capacity had reached 38.124 GW.

The nation’s “Energiewende” (energy transition) policy, responsible for Germany’s renewables revolution, shifts focus from demand to supply and from centralized to distributed generation.