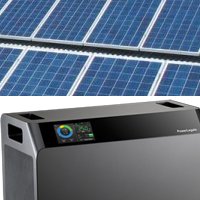 Generous subsidies and a substantial reduction in the cost of battery based energy storage has seen uptake by Germany’s solar households pick up pace.

According to German solar industry association Bundesverband Solarwirtschaft e.V. (BSW-Solar), prices for solar power storage systems have fallen by around a quarter in recent months and now more than 15,000 German households are storing electricity generated by solar panels on-site.

“This is a nice Christmas present for the Energiewende, Germany’s energy transition, and for all operators of solar power systems,” said Carsten Körnig, Managing Director of BSW-Solar earlier this month.

” Affordable solar storage systems mean that operators can now fulfill their wish for more energy independence and can count on stable electricity prices in the long term”.

Germany’s subsidy is certainly be helping home energy storage affordability too – it provides up to €660 (around AUD$990 at current exchange rates) per kilowatt of solar panels; to a maximum of 30kW.

Also supporting the storage revolution are low interest loans from KfW, a German government-owned development bank. KfW approve 32 percent more applications in the third quarter of 2014 compared to the second quarter of this year.

Just as Germany led the way with solar feed in tariffs, it’s also the pioneer in energy storage subsidies and support for residential solar power systems.

With chances of subsidies similar to Germany’s being introduced in Australia currently running somewhere between Buckley’s and none; our home energy storage revolution may take a little while longer to fully get under way. Early adopters can take advantage of financially viable solutions already available locally, such as the PowerLegato and SMA’s Sunny Home Manager Flexible Storage System.

Energy storage already has a voice in Australia – the Australian Energy Storage Council; which was established in August 2014. The AESC’s founding partner and supporter is the Australian Solar Council.

Globally, energy storage for grid-connected residential photovoltaic solar installations  is predicted to grow tenfold to reach more than 900 megawatts  in 2018, up from just 90 MW in 2014. Market research firm IHS Technology says Italy, Germany, the U.K. and Australia could account for more than 40 percent of the residential PV energy storage market in 2018.

IHS says the largest single market for residential PV energy storage in 2018 will be Japan.