One of the things that the keen solar power system owner is going to do is to compare what their system says it is generating and what the electricity retailer is paying you for the power you feed in to the grid.

If you choose right, then you will have a system that gives you plenty of information about not only what you generate, but what you use of that generated power, what you export to the grid, and what you import from the grid. I recently got a SolarEdge solar panel system on my roof, so that is a company which supplies a great advantage in the information that it supplies its users. 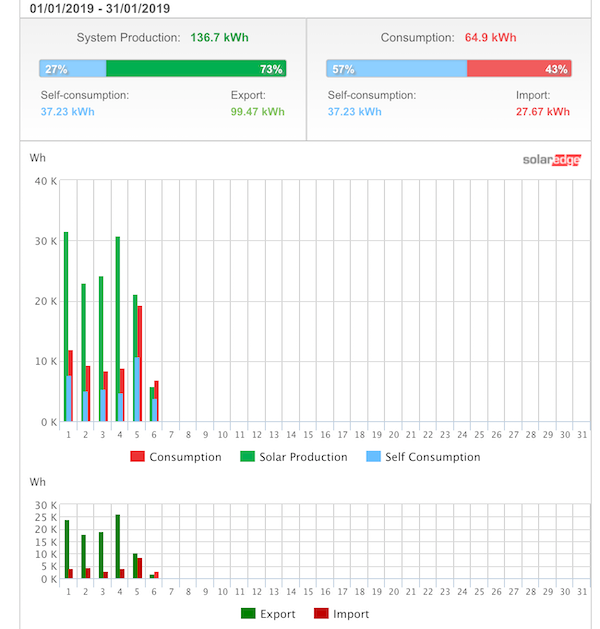 Charts of Solar Production, Consumption, Self consumption, export and Import of electricity.

As you can see, in January in Sydney so far we’ve had a couple of very sunny days and a couple of gloomy ones. But still over the 6 days, we have produced way more than we imported from the grid and…………

At first it seemed remarkable that despite the power produced, there was a baseline of about 6 to 7 kWh per day that could not be gotten below. The thing was that about 3kWh of consumption was pre-ordained by the controlled load that was largely used by our hot water heater in the wee hours of the morning. We are still paying more per kWh at that time than we get back in feed-in tariff rates from our retailer in the hours when the sun is shining. So the question poses itself, would we be better off changing our hot water heating hours to the day rather than the darkest hours for the night time?

When we went on vacation in mid January, we switched off the hot water circuit. That move reduced that baseline consumption down to 3kWh.

Time shifting of appliance use

You cannot avoid other consumption that includes things like the refrigerator, and possibly climate control. It’s impossible to shift all consumption to the hours of the day when the sun is shining. Dishwashing, clothes washing and drying are easy to control.
You can time shift oven use and other cooking to some extent. It depends on preparation. I can’t imagine making a roast at midday if the intent is for  it serving at dinner time. Keep in mind that anything involving heating is a major consumer of kilowatts. 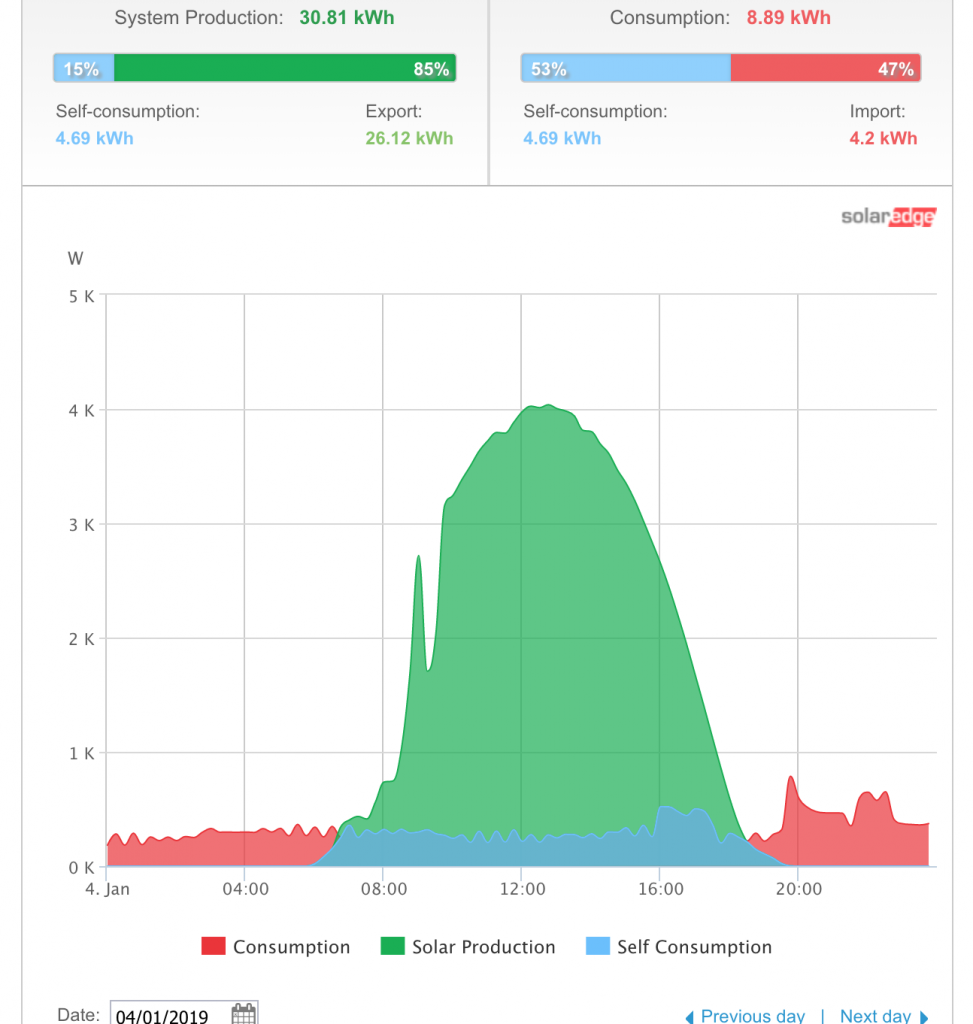 Normal Summer Day Pattern of Solar production and use.

Above you see the typical pattern of a normal Summer Day  of Solar production and use. 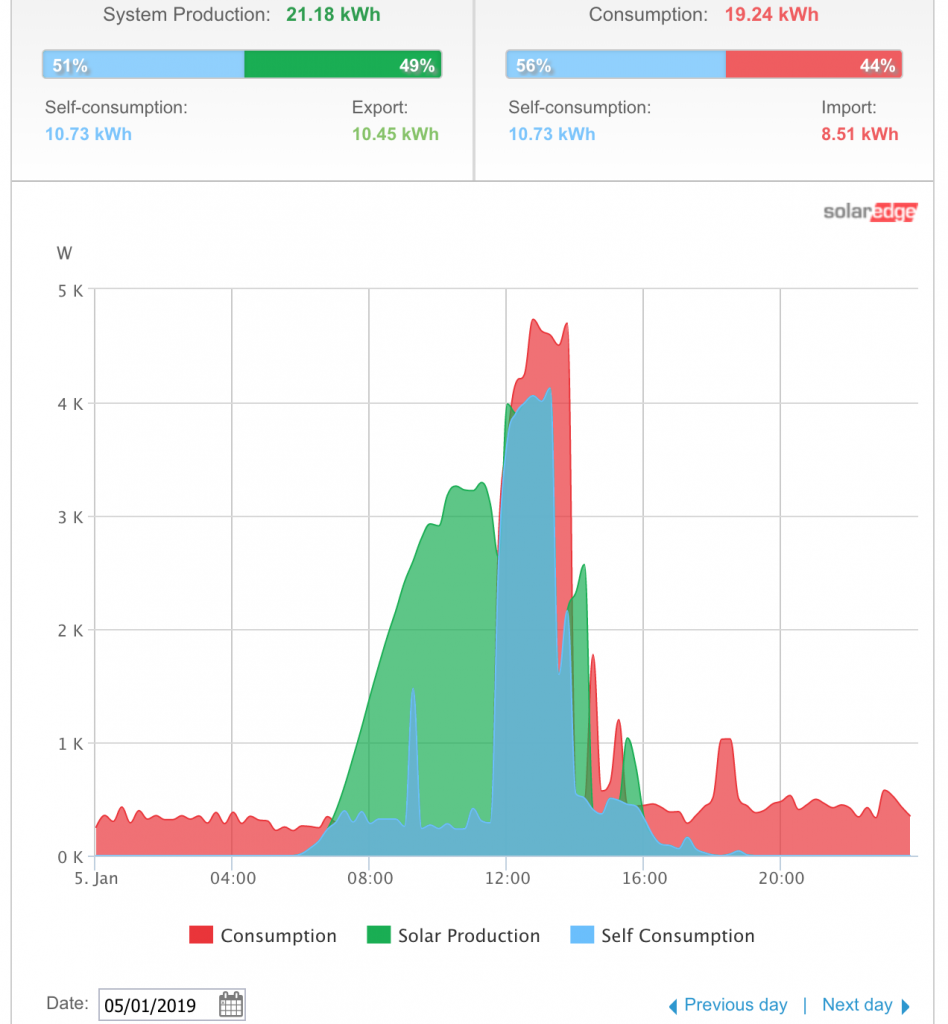 Daily Solar with air conditioning and a storm.

The next day was much more interesting. It was a scorcher, 35 degrees at 10 in the morning. Our house is reasonably resistant to high temps, usually being about 3 to 4 degrees below the outside temperatures, but it’s reluctant to cool down later in the day, maintaining that inside heat even when things have cooled down outside.
As you can see about noon, I caved and turned on the ducted central air conditioning. It chewed through the solar production for a couple of hours. At 14:30, things changed. The clouds came over, and the outside temperature started dropping. They say it dropped about a degree per minute! Even tho I had cooled down the house, I ended up throwing the doors and windows open to let the now much cooler external air in.

Before the solar install, our average consumption was about 12kWh/day. Since the smart meter install it shows we have been using around 7kWh of grid power per day. The solar was replacing most of our daytime usage. We don’t have a solar battery as the economics of that investment don’t currently stack up. This part of our solar power system performance seemed to be as expected. 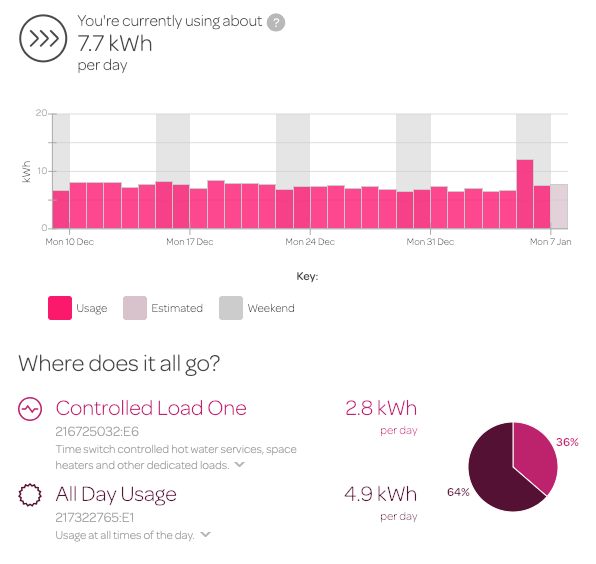 I contacted the power company, Powershop.  They grilled me about our usage, e.g.  air conditioning, pool pumps, marijuana grow farms etc.
We don’t have any pumps, and tend not to use heaters during Summer. We have A/C and a clothes dryer and an oven. But educated solar consumers use those during the day when the solar power system would cover them. There were not any guests in the home at the time. You, know the ones who run multiple drying cycles on their laundry at midnight.

I was able to review my account after the smart meter install. It looked like for a period that the power metering was inaccurate. I contacted Powershop and they said that the meters were read correctly, and that they have photographic evidence.

The next question that I asked: “Is this a meter misread or is it possible that the setup of the solar power system was incorrect?”.

The electrician who had installed the solar had expressed bemusement why on a bright sunny day, the wheel on the old non-smart meter wasn’t going backwards.

Measuring solar going out as going in

I followed up with Bradford CSR, the reputable company who did the installation of the solar power system. Their After Sales Engineer said that this is a classic problem when there is no net or smart meter. An analog meter measures current no matter which direction it is going in. It then adds up both imported and exported kWh. The effect is of apparent high usage while the old analog meter was in place for the 14 days after solar installation.

So, not only was there a charge for the electricity imported, there was a charge for that exported. As well as not getting the Feed-in tariff that I’d be entitled to. That can really be the only explanation for the anomaly in the solar power system performance.