Who doesn’t want to save money? And help save the planet at the same time, of course. But let’s be frank, most people get a solar power system to reduce their power costs. In a lot of cases, the savings show up in reduced power bills. But for the more analytical, we want to find out exactly how the extent of our solar power system performance.

For example, I recently got a solar panel system on my roof, so I looked forward to plummeting bills. Well, at first that didn’t happen. The exact opposite in fact. The bills skyrocketed. The appearance was that my household went from being an average user to having McMansion sized electricity bills.

I got solar installed on January 10, 2018, and on January 24 a smart meter was installed.  Smartly, or maybe cynically, I had selected Powershop as my retailer, because they provide a free smart meter.
As an aside, if you look at review web sites, it seems that all retailers get equal hatred. They all seem to have a rating of 1 out of 5. So, Powershop get terrible ratings, but so do Dodo and AGL and any other company that you can name.
Before the solar install, our average consumption was about 12kWh/day. Since the smart meter install it shows we have been using around 7kWh of grid power per day. The solar was replacing most of our daytime usage. We don’t have a solar battery as the economics of that investment don’t currently stack up. This part of our solar power system performance seemed to be as expected.

But, in the two weeks between the solar installation and the net meter installation the bill said my household was using and being billed for 36kWh per day, some effort in tripling its use! Especially one with 5kW worth of panels on the roof, where on a sunny day you may expect at least 20kWh worth of generation.

20kWh/d is a conservative estimate: on the best days in late December, 2018, around the summer solstice when the daylight hours are longest, it is more like 33kWh. If my solar power system is producing about 20kWh per day, as it is, then to be consuming another 36kWh on top of that, for a total of 56kWh, is just not feasible! 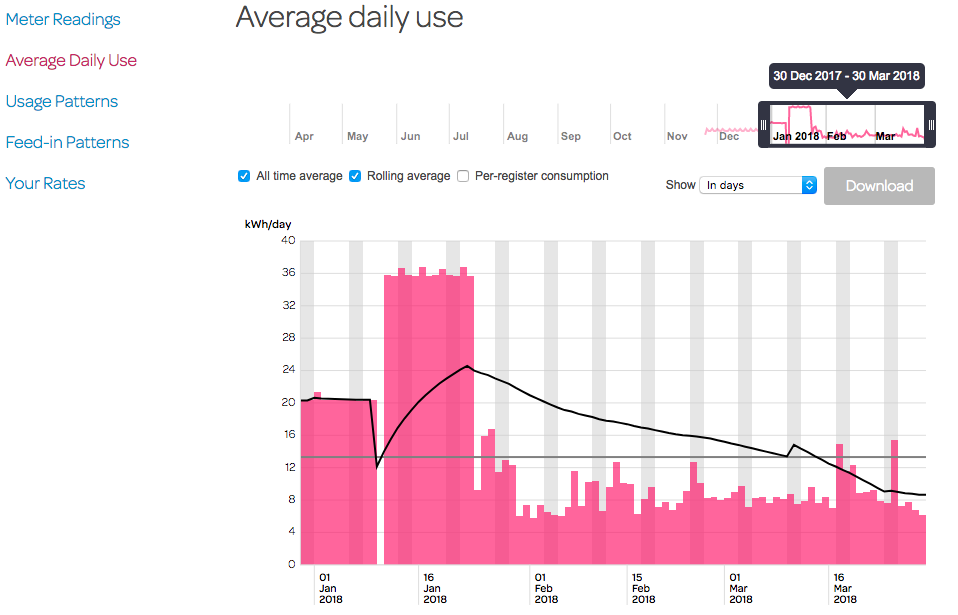 Power consumption from Powershop before solar and before smart net meter installed, and then after both.

I contacted the power company, Powershop.  They grilled me about our usage, e.g.  air conditioning, pool pumps, marijuana grow farms etc.
We don’t have any pumps, and tend not to use heaters during Summer. We have A/C and a clothes dryer and an oven. But educated solar consumers use those during the day when the solar power system would cover them. There were not any guests in the home at the time. You, know the ones who run multiple drying cycles on their laundry at midnight.

I was able to review my account after the smart meter install. It looked like for a period that the power was metering inaccurately. I contacted Powershop and they said that the meters were read correctly, and that they have photographic evidence.

The next question that I asked them: “Is this a meter misread or is it possible that the setup of the solar power system was incorrect?” The electrician who had installed the solar had showed some puzzlement as to why on a bright sunny day, the wheel on the old non-smart meter wasn’t going backwards.

Measuring solar going out as going in

I followed up with Bradford CSR, the reputable company who did the installation of the solar power system. Their After Sales Engineer said that this is a classic problem when there is no net or smart meter. An analog meter measures current no matter which direction it is going in and adds up both imported and exported kWh. The effect is of apparent high usage while the old analog meter was in place for the 14 days after solar installation.

I knew that Powershop’s instructions will be to hold the line against any request for a refund or credit. But that would be unjust in this case. I asked them to please reconsider. And if not, to please escalate this to a management level with the authority to provide the required amended charges.

In response, they said that after solar installation, the Distributor has up to 20 business days to have it configured in the National Database. Because of this they would be unable to compensate me for that period of having solar at the property.

However, persistence paid off and they declared that they would be able to credit my Powershop account with $100.00 as compensation. The squeaky wheel gets the most grease!