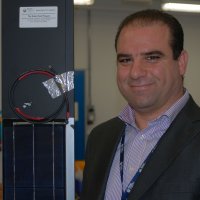 A significant chunk of a household’s energy consumption is dedicated to heating water.

Solar modules can get quite hot during normal operation and heat degrades the performance of solar panels; impacting on their sunlight conversion efficiency.

However, developing such a system is not as straightforward as it may seem and quite a few attempts having been made at combining the functions without any particular product becoming widely adopted.

Dr Hussam Jouhara of Brunel’s Institute of Energy Future has used heat pipes for his hybrid solar panel. Heat pipes are highly effective thermal conductors and are used in spacecraft and computer systems. The invention is more than just a panel; it’s an entire roofing system.

“As a professional engineer with a long-term research interest in heat pipes I could see many advantages in applying this technology to a renewable energy system,” said Dr  Jouhara.

“Until now there was no system which fully addressed all the technical and practical issues that face making an entire building’s roof a solar-powered generator of both heat energy and electrical energy.”

In addition to supplying electricity and hot water, it seems Dr  Jouhara’s modules outperform identical panels by 15 per cent due to cooler operation from the waste heat being whisked away.

He says the system is easy to install.

“Our solar panels are PV coated for the most southerly-facing aspect of the roof and are designed to clip together as a weather-tight roof as simply as clicking together laminate flooring,” he stated.

“When we constructed our test roof using standard “off-the-shelf” roof trusses, tradesmen were able to quickly and easily screw together the panels with no extra guidance than a simple set of written instructions.

Hybrid solar panels of this nature aren’t a new development. The Technique Solar Module (TSM), based on technology developed at the Royal Melbourne Institute of Technology, was developed in 2010. However, the TSM is a bolt-on affair rather than forming the roof itself.