This week Hyundai unveiled its latest hydrogen-powered vehicle: the Nexo SUV. With an 800 kilometre range, the car takes just five minutes to refill.

Hydrogen fuel cells are now attracting the attention of car makers, which means there’s more than one way of using solar energy for fuel.

While electric cars can charge up with electricity from solar panels, hydrogen can also be a solar product. Solar powered electrolysis can split water molecules into hydrogen and oxygen, the hydrogen is then used in car fuel cells. 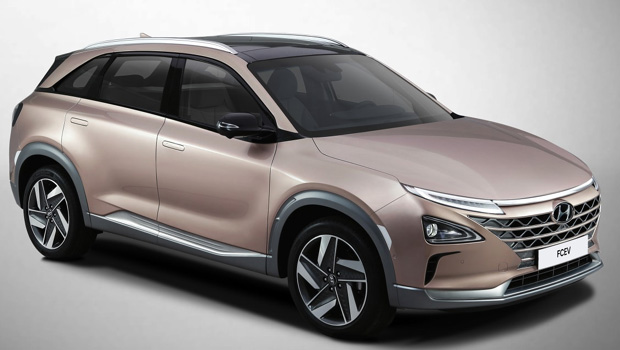 However, hydrogen may have to take a back seat to electric vehicles for a while. Electric vehicle infrastructure such as charging stations is already in place, including Queensland’s Electric Vehicle Super Highway.

According to Dr Yang, the cars needed improvement to justify spending on infrastructure. Now, he says, the vehicles are ready.

“Several years ago in hydrogen society they [said] it’s a chicken-and-egg game,” he said. “If the infrastructure is ready, the car is not ready, and vice versa. They just blame each other. But now we have proved that fuel cell vehicles can fully perform in competition with internal combustion engine performance.”

Electric and hydrogen-powered vehicles can coexist

Despite Dr Yang’s support for hydrogen, Hyundai believes both electric and hydrogen technologies can coexist.

The company’s senior vice president of the Eco-friendly Vehicle R&D Centre, Lee Ki-sang, said hydrogen technology is much more difficult and complicated than pure EV. In addition, he pointed out that research and investment in electric vehicles was around two times more than hydrogen.

It seems future car buyers will have to choose between an electric or hydrogen-powered vehicle, both using clean energy derived from the sun.

The Hyundai Nexo SUV will be available in Australia from late 2018.