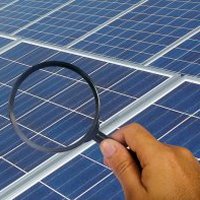 While a nice idea, Australians should be wary of solar panels incorporating battery storage and an inverter, promoted for use with grid connected homes. These include Plug-And-Play Solar Panels.

It’s always exciting to see new solar technology being developed; even if it’s not quite ready for prime time. However, the marketing of some products needs to be taken with a grain of salt by Australians as not all products are suitable for use as recommended by manufacturers.

A recent example is an upcoming product that combines a solar panel, energy storage and an inverter. You can add panels to boost output and capacity. The manufacturer says owners of the system can plug it directly into an outside power socket of a house to provide electricity to a home.

It’s a great idea in theory, but there’s a significant potential problem with this – using such a Plug-And-Play Solar Panels product on houses connected to the mains grid could be illegal in Australia.

A few years back, another “plug and play” product generated some excitement – the plug and play grid-tied solar inverter. Its use was also illegal in Australia.

These sorts of gadgets must comply with, among other regulations, Australian standards. AS 4777.1 states: “The inverter shall be connected by fixed wiring to a dedicated circuit on a switchboard”. When plugged into a power point, such a product likely flouts that standard.

The rules aren’t about preventing access to technology for the sake of it. There are safety issues that go beyond that of the person using the device.

For example, it’s not clear if these products have sufficient anti-islanding protection – can they cut out fast enough? This protection prevents such a system from exporting power to the mains grid in the event of a blackout, and potentially endangering the lives of workers carrying out restoration activities.

Another real danger is using what’s known as a “suicide plug”. This connects to a home’s external power outlet. When one end plugs into the panel, the other end has a male connection with prongs exposed. Touching it while active could carry the risk of electrocution.

Online global marketplaces are making all sorts of incredible gadgets and gizmos increasingly available to end-consumers; but Australians need to carry out due diligence on any products of interest before purchasing. Bear in mind using electrical products that don’t meet Australian safety standards can also put your home insurance policy at risk.

Installing solar + battery storage for a home is something that’s probably best left to the experts who can advise you on legal, the most appropriate (and safest) solution to your energy storage needs.