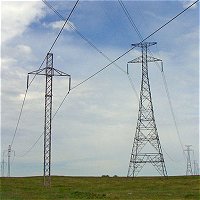 Through an interstate HVDC grid, solar energy and wind power could provide most of the USA’s electricity by 2030 – with no batteries required.

A new study by National Oceanic and Atmospheric Administration (NOAA) and University of Colorado Boulder researchers has found the USA could slash greenhouse gas emissions from electricity generation by up to 78 percent below 1990 levels within 15 years while meeting increased demand.

Power production accounts for about 40 percent of U.S. CO2 emissions. While the rapid rise and reducing costs of renewable energy is addressing this; intermittency of these sources means utilities still need surplus generation capacity as a backup. This is often in the form of natural gas-fired generators and other reserves. Additionally, energy storage has become The Next Big Thing.

The study says backup generation and storage may not be required, or could be minimized, in the future.

The USA covers a huge area and the sun is shining or wind is blowing somewhere in the country at any given time.

Alexander MacDonald, co-lead author and recently retired director of NOAA’s Earth System Research Laboratory (ESRL) in Boulder, believes key to solving intermittency is the scaling up of the renewable energy generation system to match the scale of weather systems.

It’s not just about more solar panels and wind turbines. A crucial aspect would be a new, high-voltage direct-current transmission grid (HVDC) to supplement the current electrical grid – a system comparable to the country’s interstate highway system.

“With an ‘interstate for electrons’, renewable energy could be delivered anywhere in the country while emissions plummet,” said Mr. MacDonald. “An HVDC grid would create a national electricity market in which all types of generation, including low-carbon sources, compete on a cost basis. The surprise was how dominant wind and solar could be.”

HVDC is superior to AC for bulk power transmission as vast amounts of electricity can be transmitted over very long distances with low electrical losses.

Various renewable energy rich scenarios run through a model used in the study put the resulting cost of electricity at between USD 8.6 cents per kilowatt hour and 10 cents per kWh.

In a scenario where renewable energy costs were lower and natural gas costs higher CO2 emissions were slashed by 78 percent from 1990 levels.

The researchers’ paper has been published in the journal Nature Climate Change.