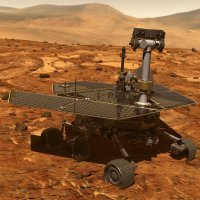 Mars rover Opportunity’s longevity is a testament to human know-how and the robust nature of its solar panels and lithium-ion battery technology.

Opportunity landed on Mars’ Meridiani Planum on January 25, 2004 for what was meant to be a 3 month mission. 12 years later – 48 times longer than the mission objective – the plucky little rover is still working away, providing valuable information to scientists about the nature of the red planet.

Opportunity has again survived another harsh Martian winter and its energy levels are increasing, helped along by wind that blew dust from the rover’s solar panels late in December and earlier this month.

Winter wasn’t an idle time for the robot.

“Opportunity has stayed very active this winter, in part because the solar arrays have been much cleaner than in the past few winters,” said Mars Exploration Rover Project Manager John Callas, of NASA’s Jet Propulsion Laboratory, Pasadena, California.

Opportunity has been exploring  rocks on the southern side of “Marathon Valley,” which is situated in a 22-kilometer-wide crater named Endeavour. During January, the rover’s abrasion tool removed surface crust from a rock and the composition of the exposed interior has been examined with instruments on Opportunity’s robotic arm.

This winter work has been keeping the rover’s solar panels tilted toward the sun crossing the northern sky, maximizing electricity generation.

According to NASA, the solar panels are currently generating more than 460 watt hours of electricity per day; up around 40 percent from earlier in the winter.

Opportunity’s solar panels can generate approximately 140 watts of power for up to four hour per Martian day under ideal conditions. The rover requires 100 watts to drive, so all movements are very carefully planned. The rover’s power system includes two lithium ion batteries weighing just over 7kg each.

Conditions are anything but kind on Mars. Temperatures can plummet to a very chilly -110C. Vicious winds whip up thick dust storms that have in the past threatened Opportunity; coating its panels in grime – but it’s these same winds that also clean the panels. The image below is an Opportunity “selfie”, depicting a before and after a cleaning event in 2014.

“With healthy power levels, we are looking forward to completing the work in Marathon Valley this year and continuing onward with Opportunity,” said Mr. Callas

You can stay up to date with the Mars mission here.

NASA has certainly received plenty of bang for its buck through Opportunity and its solar + storage system. The rover’s performance will be encouraging news to owners of the next generation of home battery systems such as Tesla Powerwall and Enphase AC Battery; both of which are based on lithium-ion technology.