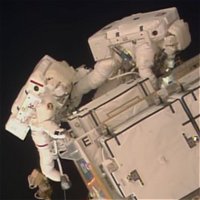 NASA astronauts have installed adapter plates and electrical connections necessary for three of six new lithium-ion batteries to be installed on the International Space Station.

The 6.5 hour exercise was the first of two spacewalks planned to finalize the installation of the lithium-ion batteries, which will replace 12 of the space station’s nickel hydrogen (Ni-H2) energy storage units. The second spacewalk will occur on Friday, January 13.

Robotics controllers remotely operated from Earth removed the nickel-hydrogen batteries and installed the new lithium-ion units on the starboard-4 truss over the Xmas/New Year period, ready for the astronauts to wrap up the commissioning work.

Eventually, twenty-four of the Aerojet Rocketdyne lithium-ion batteries will replace all 48 Ni-H2 batteries. The old batteries removed in this phase are being stowed on an external pallet for disposal when the H-II Transfer Vehicle (HTV), which delivered the new batteries, is deorbited and burns up in the Earth’s atmosphere.

“The batteries will result in nearly one-half of the launch mass and about 1.5 times more energy storage capability,” says Aerojet Rocketdyne. Safety features incorporated in the lithium ion batteries include voltage, temperature and cell-overcharge monitoring. The energy storage units will have a service life of around 10 years.

The batteries will be charged by ISS’s solar arrays, which consists of 262,400 solar cells covering an area of approximately 2,500 square meters. Combined, the four sets of arrays have a maximum 120 kilowatts of electricity generation capacity.

When the ISS is exposed to sunlight, around 60 percent of the electricity generated by the solar energy system  is used to charge the station’s batteries.

The International Space Station has been in orbit for more than 18 years and maintains an orbit with an altitude of between 330 and 435 km.

The original purpose of the space station was to act as laboratory, observatory and factory; plus provide transportation, maintenance and act as a staging base for possible future missions to the Moon, Mars and asteroids. In 2010, it was additionally tasked with serving commercial, diplomatic and educational purposes.