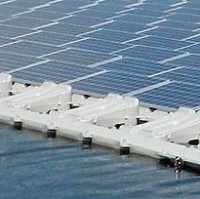 Kyocera Corporation recently announced it had established a joint venture to develop and operate a 13.4-megawatt  floating solar power plant on the Yamakura Dam reservoir, the largest floating solar installation in the world.

Kyocera Corporation and Century Tokyo Leasing Corporation have formed Kyocera TCL Solar LLC for the project, which will involve the use of 50,000 Kyocera modules installed over a 180,000m2 surface area.

Kyocera says the facility will generate an estimated 15,635 megawatt hours of clean electricity annually; enough electricity to power approximately 4,700 typical households. Approximately 7,800 tonnes of carbon emissions will be avoided annually through the project.

Kyocera TCL Solar will build and operate the installation, and Century Tokyo Leasing will provide project financing. Operations are expected to commence in March 2016.

The solar panels will be installed on floating platforms manufactured by French company Ciel et Terre. The Hydrelio platform is a modular system capable of supporting aquatic solar farms up to 50 megawatt capacity. The Hydrelio system can cope with winds up to 190kph and changes in water levels of up to 6 meters. 100% recyclable and made of HDPE plastic, Hydrelio can safely be installed on drinking water reservoirs.

As well as preserving valuable land, floating solar panel systems assist in curbing algae growth in dam environments. Evaporation can also be substantially reduced with the Hydrelio system – up to 33% on natural lakes and ponds, and by up to 50% on man-made facilities says Ciel et Terre. Due to the cooling effect of water on solar panels, floating systems can produce more electricity than land-based solar farms of a similar size.

Other smaller Kyocera floating solar power systems are currently under construction elsewhere in Japan, in Hyogo Prefecture. A 1.7MW floating solar array is being built at Nishihira Pond and a 1.2MW facility at Higashihira Pond. Combined, the two solar power plants will use 11,256 modules and are expected to be completed in April next year.

Earlier this year Kyocera TCL Solar said it planned to develop 60MW of floating installations for reservoirs in Japan by April 2015.