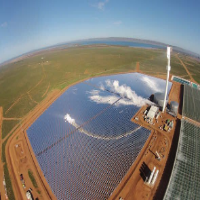 The largest solar project in the southern hemisphere is well under way in South Australia.

The first stage of the Bungala solar farm has been completed north-east of Port Augusta. The subsequent completion of stage two will then see the 300 MW solar PV farm cover an area close to the size of Melbourne’s CBD.

The Mayor of Port Augusta, Sam Johnson, says that the addition of solar thermal and energy storage will also ensure energy security for the area. As a result it positions the former coal town as the renewables capital of Australia, he told ABC News.

Meanwhile, construction is due to start on the Aurora project around 30 km north-west of Port Augusta.

This concentrated solar thermal power station is set to store a staggering 1,100 MWh of electricity.

Solar thermal technology solves the intermittency problems of solar panels. It can dispatch the electricity it generates as and when needed.

Aurora will use 10,000 heliostats, or movable mirrors, to follow the sun’s trajectory. The billboard-size mirrors reflect and concentrate sunlight then beam it onto a receiver topping a central solar tower.

However, Port Augusta is one step ahead. The town built on coal blew up the 10,000 tonne boilers from its old coal-fired power station late in 2017.

The Northern Power Station started life in 1985 and finished electricity production in May 2016.

However, Port Augusta residents still face the toxic legacy of fossil fuels. Left-over coal ash broke out of its storage site in 2017 polluting the town.

The future of solar thermal energy in Australia

The capacity for solar thermal to dispatch clean electricity when the sun goes down is a critical function. Built-in energy storage means 24-hour generation.

The rapidly falling price of solar panels to date means solar thermal has been overlooked. Yet it’s an important part of Australia’s renewable future Thornton says.