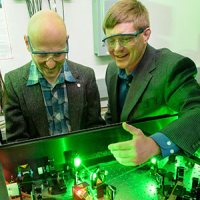 Researchers at the University of Delaware say that by changing the colour of light, they can create more efficient solar cells and even improve cancer treatments.

Light is made up of various colours and a standard solar cell can’t make use of all of them. For example, the energy from infrared wavelengths is wasted as heat. But if that infrared light could be changed to blue or green; it would allow the cell to generate more electricity.

The researchers forecast their approach to changing the colour of light could increase the efficiency of commercial solar cells by 25 to 30 percent. Now they have the funds to pursue their work after a $1 million grant from the W.M. Keck Foundation.

Particles of light are called photons and while it’s not possible to change a red photon into a blue one; by combining the energy of two or more red photons, it can be done using a process called “photon upconversion.”

Photon upconversion may be not be a new thing, but the team’s approach to it is – using a “semiconductor ratchet”.

“Think of the electrons in this structure as if they were at a water park,”  says project leader Matthew Doty. “The first red photon has only enough energy to push an electron half-way up the ladder of the water slide. The second red photon pushes it the rest of the way up. Then the electron goes down the slide, releasing all of that energy in a single process, with the emission of the blue photon. The trick is to make sure the electron doesn’t slip down the ladder before the second photon arrives. The semiconductor ratchet structure is how we trap the electron in the middle of the ladder until the second photon arrives to push it the rest of the way up.”

The semiconductor ratchets will be just a few nanometers thick and contain materials such as aluminum arsenide and gallium bismuth arsenide.

If their current work is successful, the team envisions an upconversion “paint” also being developed that could be applied to solar panels, windows and other products.

The possibilities go beyond solar cells – it could be applied to a range of applications from lightbulbs to laser-guided surgery. Chemotherapy could be another area where the technology can be applied, enabling drugs to be delivered to a specific area using an  upconversion nanoparticle that can be triggered by light. Such an application would reduce the risk of toxic drugs damaging non-diseased tissue.

“It’s amazing to think that this same technology could be used to harvest more solar energy and to treat cancer. We’re excited to get started,” says Mr. Doty.