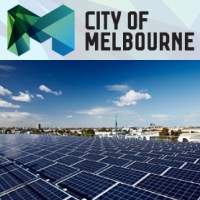 The City of Melbourne is offering rebates of up to $4,000 for the purchase and installation of commercial solar power systems.

City of Melbourne has set goals of zero net emissions by 2020 and to secure 25 per cent of the municipality’s electricity from renewable sources by 2018.  The City is helping businesses located within its boundaries that are willing to play a leadership role in achieving these goals through its rebate program and other services.

The rebate is normally awarded 30 days after receipt of a Commercial Solar Rebate – Proof of Application Form and a fully paid system invoice. Systems qualifying for the rebate must be installed and the proof of installation form submitted by 12pm, Friday 12 June 2015.

The level of rebate depends upon the size of the array of solar panels and systems must be 10kW or larger in order to be eligible. The rebates are awarded in order of application, and there is a limited number. At the time of publishing, 18 rebates were still available.

“The reducing cost of solar plus an increase in electricity prices means that solar makes economic sense for most commercial and industrial buildings, helping to save on energy bills and reduce carbon emissions,” says the City’s web site.

Further details regarding the City Of Melbourne’s commercial solar rebate program can be found here.

The rebates are in addition to other incentives available for purchasing systems, such as STC’s (Small-scale Technology Certificates), that can reduce the cost of commercial solar by many thousands of dollars.

Another way for Melbourne businesses to start making solar savings on their energy bills is through a solar PPA (Power Purchase Agreement) or leasing arrangement. These options can remove the need for up-front capital outlay. The major differences between a solar lease and power purchase agreement are the duration of the contract and pricing model.

Advice on commercial solar with regard to outright purchase, PPA or lease is available through national provider Energy Matters. In 2014, the company installed more capacity in the 10-100kW range than any other installer in the nation.