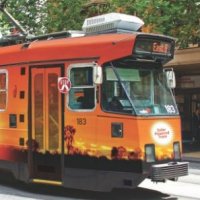 Melbourne has the largest tram network in the world – and it could soon be running on the power of the sun.

According to Wikipedia, the Melbourne tramway network consisted of 250 kilometres of track, 493 trams, 25 routes, and 1,763 tram stops as at May last year.

While trams may be an efficient and quiet mode of transport, they aren’t a zero emissions vehicle when the electricity to run them is created through coal fired power generation.

Brown coal is particularly emissions intensive – and Victoria has plenty of it. It’s this availability and previous government policies that have curtailed the growth of renewables in the state. In 2012, renewables accounted for just 7.7% of energy generation in Victoria compared to the national average of 13.14%.

Thankfully, the situation in Victoria is changing – and solar is stepping in to help clean up the state’s energy sector.

This level of generation would reduce carbon emissions by more than 100,000 tonnes a year.

An initiative of Australian Solar Group (ASG), Project Traction would be privately funded by equity and debt.

“Australian Solar Group has invested more than $3 million over 4 years developing this project,” said the company’s co-founder, Dave Holland. Mr. Holland has more than 30 years experience in technology and energy sectors and is currently also on the advisory board of the University of Adelaide’s Centre for Energy Technology.

The Swan Hill site is ready for construction, having gained the appropriate approvals and a grid connection agreement with Powercor; one of Australia’s largest electricity distribution network operators.

A Power Purchase Agreement, aka solar PPA, is a long term contract to purchase electricity generated by a solar panel system.

ASG says the entire project can be completed within a year and the first power from Swan Hill produced within 6 months of an agreement being signed.