A great deal of progress has been made in bringing access to electricity to people around the world, but more than a billion are still relying on polluting fuels for light says the World Bank.

A new report – “Progress Toward Sustainable Energy: Global Tracking Framework 2015” (PDF) – says the number of people without access to electricity declined from 1.2 billion to 1.1 billion between 2010 and 2012; a rate of progress much faster than the 1990-2010 period. 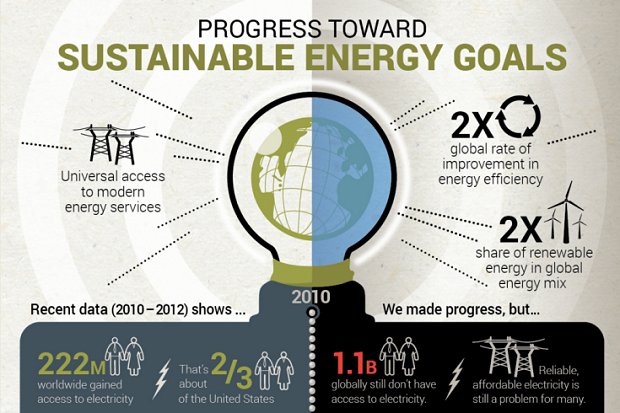 Renewable energy will be key to reaching the remaining 1.1 billion people – and the pace of construction and distribution needs to pick up. Modern renewables made up 8.8 percent of total global energy consumption in 2012, but to meet the United Nation’s 2030 SE4All ( Sustainable Energy for All) objective, the annual growth rate for renewables needs to be closer to 7.5 percent.

“We are heading in the right direction to end energy poverty,” said Anita Marangoly George, Senior Director of the World Bank’s Energy and Extractives Global Practice, “but we are still far from the finish line. We will need to work a lot harder especially to mobilize much larger investments in renewable energy and energy efficiency. Leveraging public finance to mobilize private capital is imperative in achieving these goals.”

Companies such as SunEdison have heeded the call. Earlier this year, the company announced a goal of delivering clean, renewable electricity to 20 million people in underprivileged communities throughout the world by 2020.