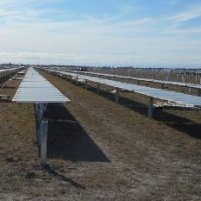 According to an update from the Australian Renewable Energy Agency (ARENA), once complete, the $164 million project will generate 140,000 megawatt-hours of clean electricity annually. This enough to power 15,000 homes and avoid 95,000 tonnes of carbon emissions each year.

Each tracker, which tracks from east to west during the day, supports 80 PV modules. 2,800 trackers will be used for the project.

JA Solar panels are being used at MSF, which is seen by JA Solar as its foundation for future large scale opportunities in Australia.

The site, situated 10 km south of Moree and off the Newell Highway, was selected for its solar irradiation levels, the flatness of the land, transport links and proximity to the national electricity grid.

ARENA has kicked in $102 million in the form of a grant for the facility and $47 million in debt financing has been provided by the Clean Energy Finance Corporation. Financial close was achieved early this month.

An estimated 100 workers are working on construction of Moree Solar Farm and the facility is expected to be finished early next year. It is expected to have an operating life of around 30 years.

The project is being developed by FRV, which has developed more than 450 MW of solar plants since 2006; 20MW of that in Australia.

FRV says when Moree Solar Farm is complete and operational,  it aims to return a yet to be determined portion of the project’s revenue into the community. The project will sell electricity directly to the National Electricity Market (NEM).

The construction of MSF is a testament to tenacity – it had a somewhat troubled start to life; particularly when it missed out on Federal Government funding through the Solar Flagships Program in 2012.