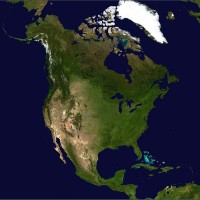 The leaders of the USA, Canada and Mexico look set to make a commitment to achieve a target of 50% clean power across North America by 2025.

The partnership will seek to align clean power policies and the integration of the three nation’s energy systems, from trading markets to transmission lines.

Some might have a little trouble accepting the definition of “clean power” though. The 50% target will not only cover renewable energy sources such as wind and solar power plus energy efficiency gains, but more controversially, also nuclear power and carbon capture and storage.

Canada already has an impressive amount of “real” clean power. Hydro leads the way at 59.3 per cent of all electricity generation, plus 5% from wind and other renewables. Nuclear power generation makes up 16% of the nation’s electricity mix.

In the USA, President Barack Obama has been a powerful advocate of clean power. He has continually admonished fossil fuel “rent seekers” during his presidency and urged an acceleration away from dirty energy.  In August last year, he unveiled the Clean Power Plan; which seeks to slash the nation’s power sector carbon sector emissions by 32 percent below 2005 levels by 2030.

With Canada already having bypassed the 50% clean power target and the goal looking to be pretty much a slam-dunk for the USA; the wild card is Mexico, which still relies heavily on thermal sources.

Mexico has substantial wind resources, the world’s third largest solar potential and also has substantial geothermal resources. Even if Mexico sticks to its own milestones, the goal of 50% clean power could still be reached across North America through the efforts of Canada and the USA.

A full briefing on the clean power partnership is expected in the early hours of tomorrow.