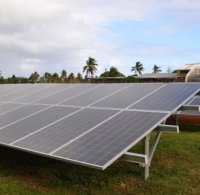 Construction has commenced on four new solar farms in the Pacific island countries of Kiribati, Fiji, Tuvalu and Vanuatu; financed under the Abu Dhabi Fund for Development’s US$50 million UAE-Pacific Partnership Fund.

The solar power projects will collectively have 1.8 megawatts capacity and their output will translate to fuel savings worth US$2 million per year. Many island nations in the Pacific rely primarily on diesel imports for electricity generation. It’s expensive, carbon intensive and creates dependence on external suppliers for what is a critical service.

Pacific Island nations can spend 10 percent of GDP or more on petroleum imports, so renewables can also free up government budgets for infrastructure investments

Completion of the solar farms is expected by the second half of 2015.

The projects will be constructed by Masdar, a subsidiary of the Abu Dhabi Government-owned Mubadala Development Company.

Masdar has already been active in the region; building the La’a Lahi ‘Big Sun’ 512kW solar farm in Tonga and Samoa’s first wind farm, which was commissioned in August this year. Both of these projects were also financed through the UAE-Pacific Partnership Fund.

The 550kW wind farm in Samoa is located on the island of Upolu; which is home to nearly 75 percent of the population. The cyclone-proof facility will generate 1,500 MWh of power per year

The UAE-Pacific Partnership Fund was launched in March last year and has so far helped fund 2.8 megawatts of renewable energy capacity across six countries in the region.

“The UAE-Pacific Partnership Fund demonstrates the tangible benefits that renewable energy offers all developing countries,” said His Excellency Mohammed Saif Al Suwaidi, director-general of the Abu Dhabi Fund for Development. “Today, renewables are cost-effective and offer real solutions for growth across the Pacific.”