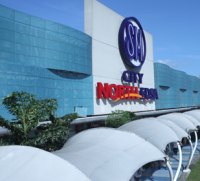 SM North Edsa in Quezon City in the Philippines now boasts what is claimed to be the largest solar array on a shopping mall in the world – and it was installed by a company led by a 21 year-old.

Philippines President Benigno S. Aquino III flicked on the ceremonial switch of the solar powered rooftop at the mall’s multi-level carpark building yesterday. The array consists of 5,760 solar panels with a collective output of 1.5MW capacity. The installation is also the largest commercial solar power system in the Philippines.

The project was carried out by Solar Philippines, which has been behind some of the other largest commercial solar rooftop installations in the country.

An interesting dimension to the firm’s achievements is Solar Philippines president Leandro L. Leviste is just 21 years old. After just 2 months experience as a Strategy Intern with the Manila Electric Company, he founded Solar Philippines in 2013. A Yale University graduate; his company now has more than 70 staff and has developed 4MW of solar capacity so far (it’s unclear if the SM North Edsa project is in that tally).

SM North Edsa is owned by SM Prime Holdings, Inc, a property development company with a portfolio of 50 malls, housing, offices, hotels and convention centers. Last year the company had  a 1.1 MW project constructed at its mall in Xiamen, Fujian Province; China.

SM Prime says it hopes the SM North Edsa solar rooftop project will serve as a model for similar developments in other commercial and industrial establishments in the country.

While solar power is still somewhat of a novelty in the Philippines, it won’t be for much longer as the nation has set a goal of being 100% powered by renewables within a decade.

Earlier this month, SunEdison, Inc. (NYSE: SUNE), announced the signing of a joint framework agreement to scope, develop and operate up to 300 megawatts of utility-scale solar PV projects in the Philippines over the next three years.