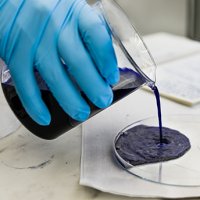 Researchers at Sweden’s Linköping University’s Laboratory of Organic Electronics have developed an energy storage device consisting of nanocellulose and a conductive polymer.

A sheet of Power Paper 15 centimetres in diameter and just a few tenths of a millimetre thick can store a similar amount of energy as commercially available supercapacitors. It only takes a few seconds to recharge the material, which can be recharged hundreds of times.

To make Power Paper, cellulose fibres are broken down into fibres as thin as 20 nanometres ((0.00002 millimetres) using water under high pressure. Added to the slurry is an electrically charged polymer called poly(3,4-ethylenedioxythiophene) polystyrene sulfonate (PEDOT:PSS) that forms a thin coating around the fibres. The liquid in the spaces between the fibres acts as electrolyte.

”Thin films that function as capacitors have existed for some time. What we have done is to produce the material in three dimensions. We can produce thick sheets,” says Xavier Crispin, professor of organic electronics and co-author of an article on the team’s progress recently published in Advanced Science.

“In summary, we developed a scalable, “true bulk,” flexible yet robust mixed ionic-electronic conductor paper with an outstanding combination of electronic and ionic conductivities,” states the article ” This enables organic and paper electronics to transcend the domain of thin films and move into the third dimension, a crucial step for mass storage applications and enabling power electronics with organic materials.”

Power Paper already holds a number of records :  highest charge and capacitance in organic electronics, highest measured current in an organic conductor, highest capacity to simultaneously conduct ions and electrons and highest transconductance in a transistor.

The next challenge for the team is to develop an industrial-scale process to make Power Paper. With further development, it’s believed the technology may not only be applied to supercapacitors, but also batteries in general.

This isn’t the first time paper has been used as the basis of a battery. In 2009, Stanford University scientists developed ultra-lightweight, bendable batteries and supercapacitors using plain paper coated with an ink made from carbon nanotubes and silver nanowires.