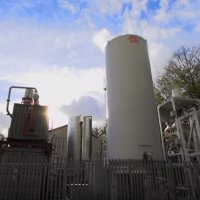 A CES system uses renewables inputs such as solar power or wind energy and/or off-peak electricity to liquefy air; which is drawn from the plant’s immediate surroundings.

The cryogenic liquid is stored at an incredibly low temperatures; below -190C. According to the Energy Storage Association, 700 litres of ambient air becomes 1 litre of liquid air after this process.

When electricity is needed, the liquid is pumped to a high pressure (150 bar), vapourised into a gas, and then superheated using heat and waste heat if available. From there, it goes through an expansion process in a turbine to generate electricity.

Professor Martin Freer, Director of the University of Birmingham’s Energy Institute, says the system has the ability to store “wrong time energy” and deploy it at times of greatest demand.

Cryogenic liquids can also improve the efficiency of diesel generators and be used to generate electricity from low-grade waste heat from power stations or industrial processes. Additionally, the system can be used at liquefied natural gas (LNG) terminals to recover cold energy.

While we won’t be hanging a CES unit on the walls of our homes anytime soon (or ever) in the same fashion as an Enphase AC Battery or Tesla Powerwall, the CES system does have applications in the utility scale arena or for large commercial scenarios. It seems the technology has the potential to create plants with hundreds of megawatts of output.

“The project has the potential to transform energy storage by using innovative technology that could create a new industry worth at least £1 billion to the UK economy,” said Secretary of State for Business, Sajid Javid MP, who opened the facility.

Birmingham Energy Institute has more than 140 academics engaged in energy and energy related research and development.