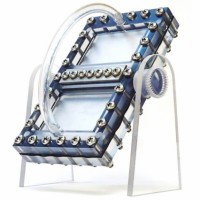 Conventional flow batteries store energy in liquid solutions contained in two separate tanks forming the positive and negative side of the battery. Pumping solutions in one direction charges the battery and the opposite direction discharges it.

MIT researchers have built a demonstration version of the battery, called a “gravity-induced flow cell” (GIFcell), which uses a passive, gravity fed arrangement instead of the tanks, valves, and pumps found in conventional flow batteries.

The rate of energy production can be tweaked by changing the angle of the device, which speeds up or slows down the rate of flow.  The liquids, separate by a membrane, flow through a narrow opening from one tank to another. The flow is reversed by turning the device over; like an hourglass.

It seems the device could use a variety chemical formulations, including the same materials used in lithium-ion batteries – but as a slurry rather than a solid. As with other flow batteries, storage capacity can be boosted by increasing the tank size.

In a previous proof of concept device built by the researchers, only one of the two sides of the battery was composed of flowing liquid; with the other side being a solid sheet of lithium. 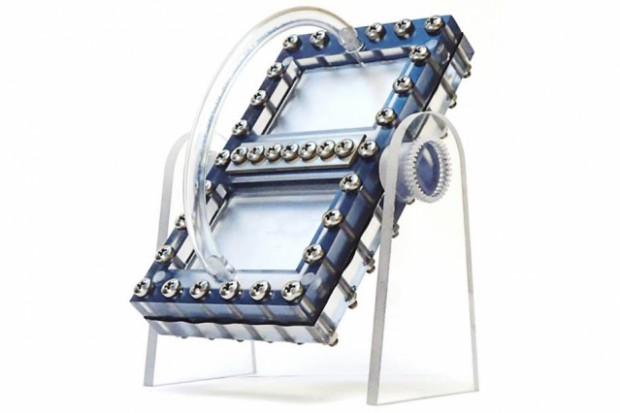 While the design pictured isn’t expected to be produced commercially, the general concept could lead to an energy storage product that is.

The team’s work and findings were published in the journal Energy & Environmental Science last month.

According to the paper’s co-author, Professor Yet-Ming Chiang , the components of the GIFcell could be easily made using injection molding or even 3-D printing. Professor Chiang says concept should make simpler and more compact flow battery systems possible.

“The authors have been able to build a bridge between the usually disparate fields of fluid mechanics and electrochemistry,” said Venkat Viswanathan, a research scientist at Lawrence Berkeley National Laboratory

“Pumping represents a large part of the cost for flow batteries, and this new pumpless design could truly inspire a class of passively driven flow batteries.”