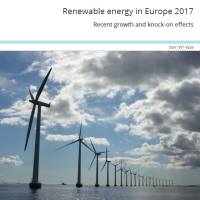 A new report states renewable energy uptake in the EU since 2005 resulted in a reduction of fossil fuel consumption and greenhouse gas emissions of around 10% in 2015.

The report, published yesterday by the European Environment Agency (EEA), states the biggest reductions in fossil fuel use and carbon emissions through a switch to renewable energy sources occurred in Germany, Italy and the United Kingdom.

Compared with the level of gross final renewables consumption in 2005, in 2015, the EU reduced total GHG emissions by 436 Mt CO2 equivalent, cut its demand for fossil fuels by 130 million tonnes of oil equivalent (Mtoe) and reduce its primary energy consumption by 36 Mtoe.

Use of renewables in member states varies greatly; currently ranging from more than 30 % of gross final energy consumption in Finland, Latvia and Sweden, to 5 % or less in Luxembourg and Malta. 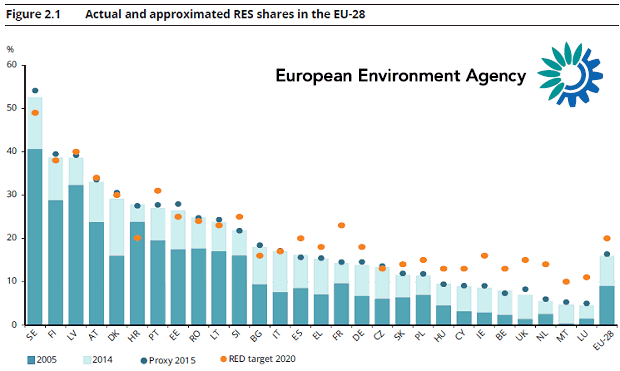 Coal was the most substituted fuel across Europe in 2015, representing approximately 50% of all avoided fossil fuels, followed by natural gas at 28%. In 2015, renewable energy accounted for 77 % of new EU generating capacity for the eighth consecutive year.

Across the EU, renewable energy use reached 16.7% in 2015, which the EEA report says enabled it to meet its interim targets for that year and places the EU on course to reach its target of 20 % by 2020.

However, the report states for 2030, the EU and its Member States need to intensify their climate and energy efforts. Some of the significant challenges that remain include formulating adequate target-driven policies, coming to an agreement on an EU monitoring system and improving innovation capabilities.

“.. the EU and its Member States must find solutions to focus and coordinate their efforts and to learn from each other, in order to remain leaders in low-carbon energy transitions.”