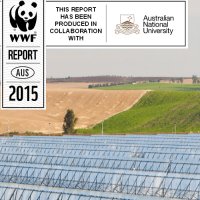 Australia has the potential to reach 100% renewables and zero net emissions by 2050 according to a report from Australian National University’s Centre for Climate Economics and Policy.

Commissioned by WWF-Australia, the report’s primary focus is on how deep cuts to Australia’s emissions can be achieved, and at a low cost. An important strategy is boosting uptake of renewables.

The report notes 100% renewable energy can be supplied through utilising existing technologies such as wind turbines, solar panels and concentrating solar thermal.

Surplus or deficits in supply could be addressed by molten salt storage associated with solar thermal plants, biomass-fired generators and existing hydropower.

However, a rapid shift to 100% renewables could be problematic in that it would mean early retirement of significant existing power generation assets – and while that may be attractive to many; it’s not going to happen without a massive fight.

“A more gradual transition to a near-zero carbon system, by around 2040, would take advantage of natural asset turnover and be more cost effective, and would be combined with early targeted retirement of Australia’s most emissions intensive power stations. Almost all of Australia’s existing electricity generation assets will be retired before 2050 in any case.”

Going green in such a big way doesn’t mean ‘we’ll all be rooned’.

“Most economic modelling indicates that ambitious mitigation action does not dramatically change the structure of the Australian economy, and that all industries that are growing in the base case,” says the report.

The devil in the detail is policy stability – a devil we’ve become all too familiar with already. The current argy-bargy over Australia’s Renewable Energy Target has seen new investment in large scale renewables practically stall. Local investment in new large-scale renewable energy projects collapsed in 2014 to levels almost 90 per cent lower than the year before.

The report, “Australia Can Cut Emissions Deeply And The Cost Is Low” can be viewed in full here (PDF).