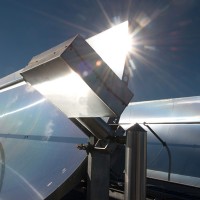 The world-first rooftop solar thermal system is aimed at reducing the Australian retail sector’s huge energy bills and was developed with a $520,000 grant from the Australian Renewable Energy Agency (ARENA).

The $1.2 million pilot system resulted from a joint venture between CSIRO and partners. The air-conditioning unit has been operating successfully at the Stockland Wendouree Shopping Centre in Ballarat for seven months,  with the project reaching its final ARENA funding milestone on Friday.

“ARENA is committed to supporting innovative projects like this, and to helping share the lessons learned amongst the wider RD&D sector, powering Australian renewable energy innovation well into the future,” said ARENA CEO Ivor Frischknecht.

The CSIRO system uses concentrating solar thermal technology to produce temperatures of between 150-200 degrees Celsius that drives a closed-loop two-wheeled “desiccant” air conditioning unit – which acts as a dehumidifier, removing moisture from the air.

Solar heat is used to drive a high temperature wheel for regeneration; while a low temperature wheel operates without any external heat to deliver greater efficiency on a commercial scale. The air conditioning technology can be used year-round, supplying space heating in winter, space cooling in summer, and solar hot water 365 days a year.

According to CSIRO, the system provides a solution to the skyrocketing energy consumption of large commercial spaces such as hotels, offices and shopping centres; where heating and cooling make up 60 percent of total energy use.

“CSIRO’s energy research is driving down costs of renewable technologies, accelerating the transition to a lower-emissions future.”

Another major advantage of the air conditioning unit is its size. The CSIRO project takes up 40 percent less room than traditional desiccant systems, even taking into account the solar troughs required to power the system and the thermal oil tank used to store heat.

ARENA says it will continue to work with the CSIRO and its partners as they monitor the pilot technology over the next year to assess the long-term viability of the design.

“Like any new and innovative technology moving along the innovation chain, there have been significant challenges deploying this system on a commercial scale. If these challenges can be overcome, the technology could have potential to help increase the energy efficiency of heating and cooling commercial buildings,” the Agency stated.