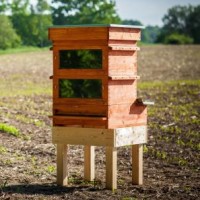 Solar power has been utilised in the battle against the number one enemy of honeybees – the Varroa destructor mite.

Aside from supplying us with honey and other products, bees play an incredibly important role in ecosystems and pollinate many crops. It’s been said that if bees disappeared from the face of the planet, humanity would soon follow.

A major threat facing bees is the Varroa destructor mite. Australia is the only country in the world where the mite hasn’t established itself, but some experts believe it’s only a matter of time.

According to BeeAware, Varroa mites can feed and live on adult honey bees but prefer to attack larvae and pupae. This causes deformities and weakening of the bees and leaves them susceptible to various viruses; which may also be transmitted by Varroa destructor.

The impact of this tiny mite has been devastating overseas. Even in areas where Varroa mites are being managed, some areas still report losses of up to 30% during winter – and that’s even with the use of dangerous pesticides.

Winter is a key word here – Varroa mites love the cold. Previous attempts to heat hives to a point that the mites are killed and the bees left unharmed have apparently been unsuccessful.

A solar heated bee hive called the Thermosolar Hive could be a game changer.

Using the Thermosolar Hive appears to be relatively simple. The outer lid of the hive is removed, and then the sun warms the upper section of the hive to the desired temperature; which is indicated on an LCD readout on the side of the hive. The lid is replaced and the design of the hive ensures the temperature is maintained long enough that the majority of the Varroa mites are killed without harming the bees.

The process is repeated ten days later to kill off the remaining mites and those that were on bees not in the hive at the time.

The concept appears to be a hit. The creators of Thermosolar Hive recently launched a crowdfunding campaign to raise the funds needed to start commercial production. While the campaign has only been running a short time, they’ve already exceeded their initial target.