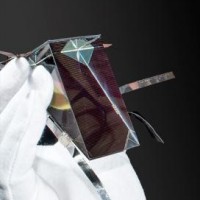 Researchers at the University of New South Wales’ Australian Centre for Advanced Photovoltaics have developed a solar cell with a conversion efficiency of 34.5% – a new world record for non-concentrated sunlight.

The record was set using a 28 cm2 four-junction mini-module embedded in a prism that splits the incoming rays into four bands. A silicon cell is on one face of the glass prism, with a triple-junction solar cell on the other. The triple junction cell is made up of a layer each of  indium-gallium-phosphide; indium-gallium-arsenide and germanium. Each layer utilises different light bandwidth to generate electricity.

The conversion efficiency of the prismatic solar cell has been confirmed by the U.S. National Renewable Energy Laboratory (NREL) and is almost 44% more efficient than the previous record set by the USA’s Alta Devices; however, Alta Devices’ device was considerably larger.

The researchers responsible for the breakthrough are Dr Mark Keevers and Professor Martin Green; part of the same UNSW team that set a world record in 2014 in CPV (concentrator photovoltaics) by achieving 40% conversion efficiency.

Professor Green has been behind many developments in solar technology and is sometimes referred to as the “father of photovoltaics”.

These developments have more than just a “wow” factor. PERC (passivated emitter rear cell) technology, invented at UNSW and now in wide use, is forecast to save $750 million in residential electricity generation in the next ten years.

Professor Green says Australia’s research in solar PV has generated flow-on benefits of more than $8 billion to the country to date and has high hopes for the latest development.

“What’s remarkable is that this level of efficiency had not been expected for many years,” said Professor Green. “A recent study by Germany’s Agora Energiewende think tank set an aggressive target of 35% efficiency by 2050 for a module that uses unconcentrated sunlight, such as the standard ones on family homes.”

The very early-stage prototype will hopefully lead on to devices suitable for rooftop solar power applications in the years ahead; but in the shorter term the technology could appear in conjunction with solar tower power plants.

“This encouraging result shows that there are still advances to come in photovoltaics research to make solar cells even more efficient,” said Dr. Keevers. “Extracting more energy from every beam of sunlight is critical to reducing the cost of electricity generated by solar cells as it lowers the investment needed, and delivering payback faster.”