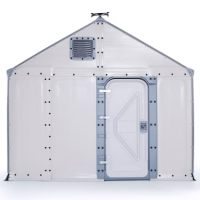 A flat pack emergency shelter incorporating solar power has won the Beazley Design of the Year for its contribution towards the global issue of population displacement.

Operating as a social enterprise, the project strives to create a better “home away from home” for millions of displaced people across the world.

The shelter arrives in two boxes including required tools and can be assembled in around four hours by four people.

The shelter is 17.5 sq. m, large enough for 5 persons, and weighs just 169 kilograms. It has semi-hard, non-transparent walls, four windows and a high ceiling. The door is lockable both from the inside and the outside. The Better Shelter’s frame is made from galvanised steel, with roof and wall panels made from a recyclable plastic polymer. 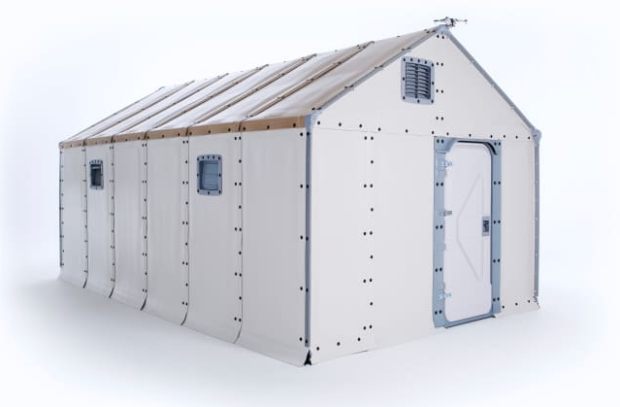 A small solar panel placed on the roof generates enough electricity to power a light for 4 hours or charge a mobile phone.

While it’s not luxury accommodation by any means, the Better Shelter provides more secure, dignified and comfortable accommodation. The modular design of the shelter also makes it adaptable for various applications and locations.

The project has grown significantly since we first reported on it in 2015 – 30,000 shelters are already in use around the world.

Better Shelter took out both the Architecture award and the 2017 Grand Prize in the Beazley Design of the Year.

“Providing not only a design but secure manufacture as well as distribution makes this project relevant and even optimistic. It shows the power of design to respond to the conditions we are in and transform them,” said competition judge Dr Jana Scholze, Associate Professor, Curating Contemporary Design , Kingston University

” Innovative, humanitarian and implemented, Better Shelter has everything that a Beazley Design of the Year should have.”

The Better Shelter project team were modest concerning the win.

“We accept this award with mixed emotions – while we are pleased that this kind of design is honoured, we are aware that it has been developed in response to the humanitarian needs that have arisen as the result of the refugee crisis,” said Better Shelter’s Johan Karlsson.